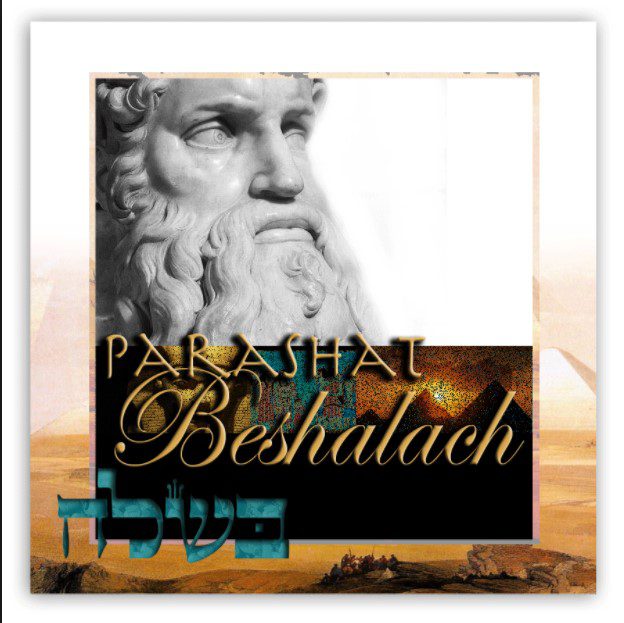 In this Shabbat’s weekly Torah portion Bo Exodus 13:17 – 17:16, soon after allowing the children of Israel to depart from Egypt, Pharaoh chases after them to force their return, and the Israelites find themselves trapped between Pharaoh’s armies and the sea. God tells Moses to raise his staff over the water; the sea splits to allow the Israelites to pass through, and then closes over the pursuing Egyptians. Moses and the children of Israel sing a song of praise and gratitude to God.

In the desert the people suffer thirst and hunger, and repeatedly complain to Moses and Aaron. God miraculously sweetens the bitter waters of Marah, and later has Moses bring forth water from a rock by striking it with his staff. He causes manna to rain down from the heavens before dawn each morning, and quails to appear in the Israelite camp each evening.

In this week’s Haftara Prophets reading Judges 4:4 – 5:31 , describes the fall of the Canaanite general Sisera and his armies, who were swept away by the Kishon River, and Deborah’s ensuing song of thanks. This parallels this week’s Torah portion which discusses the drowning of the Egyptian forces in the Red Sea and and the subsequent songs led by Moses and Miriam.

Deborah the Prophetess was the leader and judge of the Israelites at a difficult time; the Israelites were being persecuted by King Jabin of Canaan and his general Sisera. Deborah summoned Barak son of Abinoam and transmitted to him God’s instruction: “Go and gather your men toward Mount Tabor, and take with you ten thousand men of the children of Naphtali and Zebulun. And I shall draw to you, to the brook Kishon, Sisera, the chieftain of Jabin’s army, with his chariots and his multitude; and I will give him into your hand.” At Barak’s request, Deborah accompanied him, and together they led the offensive.