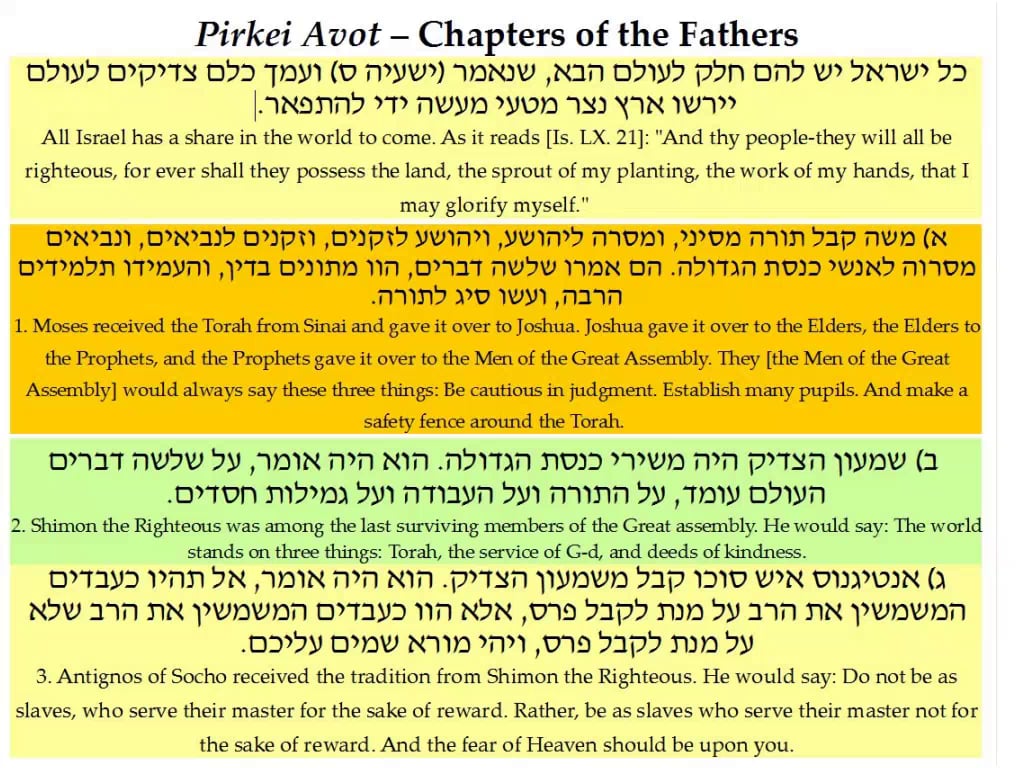 Rabbi Elan Adler introduces a famous Jewish work called ‘Chapters of the Fathers’ which has also been referred to over the ages as ‘Ethics of the Fathers’. In Hebrew this work is called ‘Pirkei Avot’. In this introductory lesson, the Rabbi tells us that this work is small — only 6 chapters long — yet why it is an important part of the Mishnah, and he explains for Christians what are the “Mishnah” and “Talmud”. Then the journey begins! Rabbi Adler begins to explain the first few sentences of ‘The Chapters of the Fathers’ in this lesson, to give us a taste of where we might be heading. NOTE: The recorded sound quality improves in week 6. NOTE: Bob’s Applications appear after some of the lessons. They represent his own perspective on how we as Christians could apply this specific lesson to our Christian walk. Please consider writing your own Christian application in the comments of any lesson that touches you! Bob’s Application: The opening words of the first chapter of this work are: All Israel has a share in the world to come. This sentence is massive in its scope and claim, and Rabbi Adler’s explanation and his quotes from Maimonides, (probably the most respected Jewish scholar in the last 1000 years), are simply amazing! I’m not going to spoil it here! Go listen to the lesson itself before continuing this application! Now that you have listened, did you hear what he said and did you catch the enormity of it? It seems that Maimonides comments touch upon the very same paradox that also exists in the New Testament where Paul says in Romans 11:26 ‘and so all Israel will be saved’ but then says in Romans 9:6 ‘for they are not all Israel who are descended from Israel, nor are they all children because they are Abraham’s descendants’. Then how does Maimonides distinguish those from Israel, and not from Israel in his mind? His answer is the very same answer that Hebrews 11:6 gives: ‘without faith it is impossible to please God.’ So here is my suggested application. Let’s get rid of the stereotype that many of us were taught as Christians that Jews do not see their life as life of faith. And I expect we will be exploring this topic much more in the weeks ahead, in various ways and from various teachers. So let’s keep our ears tuned for more on faith as we go forward.

Here are the lessons in the Introduction course: