We heard a story from Root Source friend Dennis Northington about his interaction with a homeless person during Hanukkah and asked him to write it up for us. Enjoy!
I love the burgers and fries at a food trailer in downtown Austin, Texas called Downtown Burgers. They are the best. 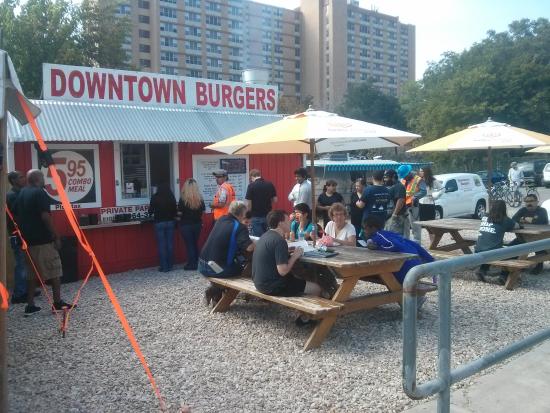 Eating there tastes like heaven on earth and recently I was fortunate to get a small taste of the Messianic age of the world to come.
About once a month I enjoy walking the five blocks or so from my office to visit with the owner Steve and sit quietly at one of his picnic tables and unwind, spending some quite time to just relax and forget the grind.
But during my last visit, another plan unfolded.
As I stood there at the counter in my starched shirt, coat and tie, ordering my usual, a quarter pound burger with jalapeños and fires, I noticed a fellow out of the corner of my eye digging through a nearby trash can looking for any scraps he could find.
I walked over and asked him if he was OK. He said everything was fine, but that he was very hungry because he had not had a good meal for nearly two days, so I asked him if he would let me buy his lunch.
With no hesitation he said, “please.”
A few minutes later, our food was ready, and he grabbed his bag of burger and fries and started to leave, but I asked him if he had time, would mind sitting down with me so we could have lunch together and visit some more.
As he sat down, he told me his name was Daniel. I immediately asked him if he knew the origin of his name. He said yes of course it’s Hebrew and it means “God is my judge.”
Before continuing any further, I need to tell you something that happened earlier that morning:
During my commute to work, I received a call from a friend for whom I had used a credit card to purchase a Super Bowl raffle ticket several weeks earlier. I had begun wondering when he might give me a call about repaying me that loan. Since he was now ready to pay me back I stopped by his office, and after a good visit with him he handed me a crisp new $100 bill, which I put into my pant’s pocket and promptly forgot.
Now, back to our story.
I asked Daniel if living downtown on the street was safe. He said yes usually, but that he was robbed the night before. I wondered what anyone would possibly take from him so I asked:
“What did they steal from you?”
Daniel told me that they took his sleeping bag and winter coat, but that he was not too worried because, as he said:
“God would provide.”
He also told me that he prays a lot but never asks for much, but that very morning he asked God to send someone to help him because he need $100 to restore what had been taken.
Astonished, especially since I never carry cash, I asked Daniel why $100, why not more, why not ask God for $200?
He said that he did not need more because he had priced out those items already that morning, and that was all he needed to replace his coat and bed, so he asked The Lord for $100.
You might imagine, that new Ben Franklin really started to heat up as I told Daniel that I never, ever carry any cash, but that through a strange series of events, today I did happen to have cash in my pocket.
When I reached into my pocket and handed him the $100, I told him that our Father obviously wanted him to have this blessing today as an answer to his morning prayer.
Daniel’s reply was:
“Yes but even more he wants YOU and your family to be blessed”
and he asked if he could say a prayer because that was all he had to offer in return: a blessing.
I was surprised to say the least, but immediately said yes, that I would really appreciate it.
Daniel then looked me right in the eye and said what I had least expected:

Stunned and teary eyed, I asked Daniel how he knew that prayer.
He simply replied: “I read God’s word.”
That day Daniel gave me a taste of Olam Ha-Ba (heaven on earth) and I will never forget it.
Dennis Northington – December 2017
Subscribe
Login
3 Comments
Oldest
Newest Most Voted
Inline Feedbacks
View all comments