Our meetings in the Knesset also included some fascinating people with whom we had the chance to snap a few photos.

Below is Member of Knesset (MK) Yoav Kisch who has the responsibility for the Knesset’s relationship with the United Kingdom. Yoav gave us the exciting news that the Knesset is working on plans to celebrate the 100th anniversary of the Balfour Declaration in December 2017. He is beginning to make overtures to the British Government to see if they want to participate in this celebration. We must pray for his favor in these discussions and for receptive ears. The celebration WILL HAPPEN no matter what. The question is whether the UK will officially participate or not! 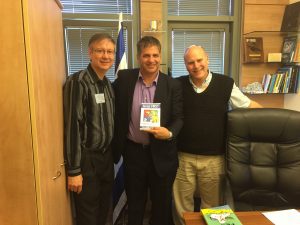 Yoav’s grandfather was the highest ranking Jew to ever serve in the British Army. Wow, that is quite a tombstone. Yoav has that picture right by his desk as a constant reminder. 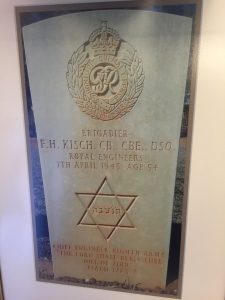 Yoav was interested in the book. He and his staff actually asked a lot of excellent questions. 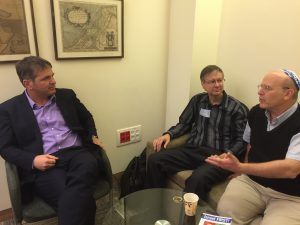 Here is Gidon doing a selfie with MK Miki Zohar and me. Miki is a very friendly, even gregarious member of the Knesset. He is working to allow more business managers the right to close during the Shabbat if they want to do so. (Some businesses force all their locations to remain open). 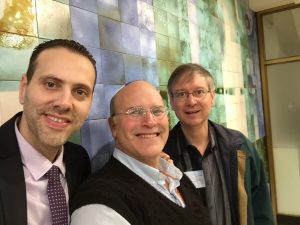 Gidon also presented one of our books to MK Gilad Erdan, who is also the Minister of Public Security. Gilad has a huge responsibility in an area of particular interest to the Jubilee year. He helps to manage the details regarding the freedoms that are allowed by Jews on the Temple Mount. He needs our prayers! 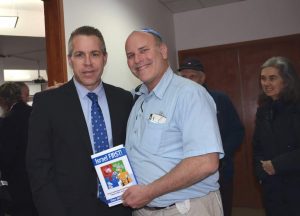 Below is one of the newest members of the Knesset, Sharren Haskel. She is originally from Canada although you would not know this from her accent. She has none that I could tell. She, like many other MKs are willing to speak to groups when they travel. 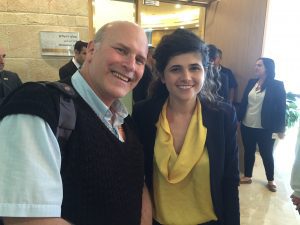 Other MKs we met do not show on this blog post because we already created separate posts with photos and videos:

Yuli Edelstein – Speaker of the Knesset

Finally, here is someone who is not a member of the Knesset, but might be soon. Our own Root Source teacher, Yehuda Glick. He is next in line for the Likud party, so if anyone drops out for any reason in the next 3 years, he will immediately be granted a position.

Below is a photo I took of Yehuda introducing two Turkish friends of his to another official (the woman in the picture). 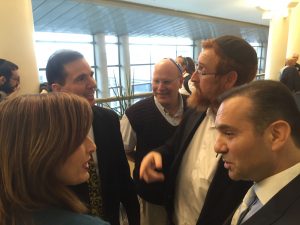 These men, both Muslims, had traveled from Istanbul Turkey to tell the Israeli government that they are leading efforts to stand against Islamic terrorism. Yehuda, who had met them when he was invited to speak in Turkey last year, was helping them meet various officials in Israel, even the Prime Minister. Here is a copy of some books they were presenting. 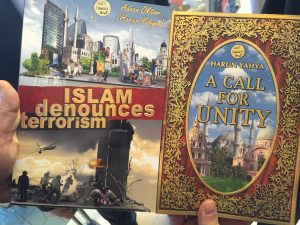 Now, there’s an interesting idea. Write a book that is kind to Israel and then present it at the Knesset! That reminds me of King Solomon’s words in Ecc 1:9 when he answers the question: Is there anything new under the sun?