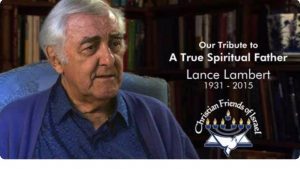 When we wrote Israel FIRST!, we agreed to hold ourselves accountable regarding predictions made, which were listed in Appendix B of the book. Our thought is to do this in two ways. First, we will blog articles on some of the more interesting items that will allow you to make your own comments as well. As you know we believe in the idea of interaction and a community of people learning from each other. Second, we will publish a detailed report periodically that can be downloaded from our website, where we address each of the 52 predictions we made in the appendix.

In this post we would like to discuss the last prophetic word given by Lance Lambert before his death on May 10, 2015. That prophetic word was written in the book as follows:

Everything in Israel will change, upside down and inside
out. Nothing will be where it used to be. They will seek to
destroy Israel, but they will see that they are destroying
themselves. Bibi Netanyahu has been faithful. Everything
will change, and the only certainty is this: “I am The Lord.
Do not fear, I will defend Israel and I will save her. You will
suffer, and suffer greatly, because I will turn everything
upside down and inside out. I will not fail you and I will
not fail Israel. Take note when you see these things. I am
in the battle and I have won. Keep your eyes on My power
and you will be safe.”

We have to know the Lord and the power of His
resurrection. It’s not enough to be a dead Christian. If The
Lord says it’s going to be unparalleled, then it is going to be
unparalleled. It’s worth it all—knowing Him and trusting
in Him.

“Watch Russia, for she is up to no good. Watch her
carefully,” says the Lord. “With your own eyes, you shall
see My triumph over darkness and evil. Trust Me,” says
the Lord.

This word has two focus points: Israel changing in a very significant way, and Russia needing to be watched. We will discuss his prophecy regarding Russia this week, and Israel next time.

Regarding Russia, it seems to us that Lance’s word of warning has already been fulfilled in the major move Russia made in September to re-establish itself in the region of Syria, to bolster Syrian President Bashar Assad and to do battle against some of the Sunni forces attacking Assad. This move strengthens his relations with Syria, Shiite Iran and Lebanon, while providing assistance to Europe in potentially reducing the flow of Syrian refugees.

The move into Syria occurred just after the Shemitah year ended, before the Sukkot holiday. This caught most of the world by surprise, including, it seems, President Obama who spent a significant portion of his later UN speech protesting Russian actions. The world was not expecting a Russia that seemed embroiled in the Ukraine to be willing to enter the Middle East, but it seemed that the vacuum left by the inaction of the United States was too opportune to ignore.

Some Christians including John Hagee have said that the move by Russia is a fulfillment to the Blood Moons predictions, being the precursor to an imminent Gog/Magog war against Israel. We did not go so far to tie Gog/Magog to the Blood Moons, at least in our book. (We said that their pattern in history did not involve war upon Israel in the immediate aftermath of the fourth Blood Moon.) Regarding predictions about Russia, our book was almost silent except for the inclusion of this word from Lance Lambert, which felt a bit of an odd inclusion at the time, but not any more!

Regarding Russia and Israel, the relationship between them is one of open communication, even if cautious interaction, probably the most open in decades. Russia has even offered Netanyahu a proposed deal to protect the oil pipeline between its Leviathan gas fields in the Mediterranean and Turkey from sabotage by Islamic terrorists, along with its previously obtained rights to develop part of those fields themselves. Russia is eager to maintain an interest in all gas lines into Europe, and Israel can leverage the fact that Israel and Russia share a mutual enemy in ISIS, and Israel knows that Islamic forces would be reticent to attack a Russian fleet that is protecting that pipeline. Incidentally, Vladimir Putin is the only Russian President to ever visit Israel.

Even if Putin is sincere in his statements regarding his desire to work cooperatively with Israel, a future leadership change in Russia could quickly undo the progress. Indeed, the word from Lance Lambert is still appropriate that we should continue to “Watch Russia carefully”. Thank you, Lance for this prophetic word.