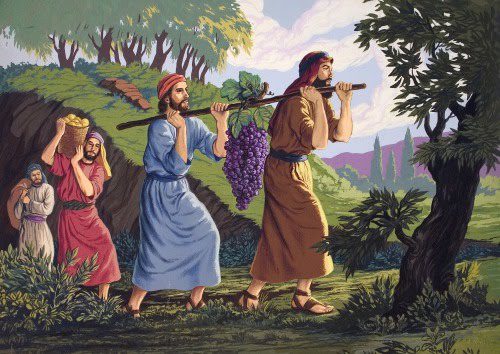 In this Shabbat’s weekly Torah portion Shelach Numbers 13:1–15:41, Moses sends twelve spies to the land of Canaan. Forty days later they return, carrying a huge cluster of grapes, a pomegranate and a fig, to report on a lush and bountiful land. But ten of the spies warn that the inhabitants of the land are giants and warriors “more powerful than we”; only Caleb and Joshua insist that the land can be conquered, as God has commanded.

The people weep that they’d rather return to Egypt. God decrees that Israel’s entry into the Land shall be delayed forty years, during which time that entire generation will die out in the desert. A group of remorseful Jews storm the mountain on the border of the Land, and are routed by the Amalekites and Canaanites.

In this week’s Haftara Prophets reading  Joshua 2:1 – 2:24, tells the story of the spies that Joshua sent to scout the city of Jericho, prior to the Israelites’ invasion of the Holy Land, a point in common with this week’s Torah reading, which discusses the twelve spies that were sent by Moses years earlier to explore the Holy Land.

Joshua sent two spies to Jericho, where they lodged at an inn located in the city’s walls, operated by a woman named Rahab. Their presence was quickly discovered by the king who sent for Rahab and asked her to turn in her guests. Rahab responded that her guests had already left the city — when actually she had hidden them on her rooftop.