For those who consider that the Bible is an accurate representation of history, or entirely from God, the widely published idea that a solar eclipse could corroborate those events seems like good news for sure. Not so fast, please.

Yes, at one level, I suppose that if someone had decided that the Exodus was just a myth, and came across the idea that one of Joshua’s battles actually occurred on Oct 30, 1207 BC, then this news might increase their faith in the Bible. That would be fine. The date in discussion would be Joshua’s battle of the long day – the day that the sun stood still for a whole day while the army of Israel defeated the five kings of the Amorites.  (Joshua 10:5-14).

But once we look below the surface, we discover that bait has two sharp hooks implanted in it. First, it reduces one of God’s greatest natural miracles to becoming a pre-programmed, run-of-the-mill solar eclipse. And second, it plays right into the hand of many academics that defy that the Exodus and other such events even happened. Let’s investigate.

That the Bible’s statement that the sun stood still in the middle of the sky for a whole day, should be re-understood as the occurrence of an annular solar eclipse instead is very problematic for believers of the Bible. 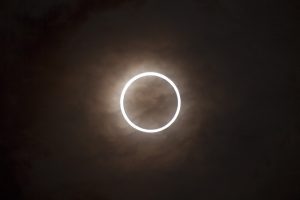 Photo of 2012 Annular Solar Eclipse (By Nakae from Tokyo, Japan)

Not so, says Sir Colin Humphreys, co-author of an English language paper published in October 2017 issue of Astronomy & Geophysics that started all the hoopla in publications all around the world.  He explains his reasoning for this theory in a comment he posted on the online publication: Mosaic.

Our calculations show that the eclipse was in the afternoon. The light from the sun on the earth started decreasing from its normal level at about 15.30 until at about 16.50 it was about ten times less intense than normal and dusk set in. Any flying birds would have roosted. As the eclipse passed, the level of illumination on the earth would have increased, before it declined due to the setting sun, dusk fell again and the sun set. So we had a double-dusk day. At the first dusk, the Israelites on the battlefield (without watches!) would have assumed that the day was coming to an end, but they had not yet defeated the Amorites. They needed more time! Then the dusk lifted and they had more daylight before the sun finally set. The day was apparently lengthened. The hours of light were apparently prolonged. I believe our explanation is fully consistent with the biblical account. It was a wonderful miracle of timing.

But, there are many problems with this explanation for Bible believers.  First, the explanation did not mention the key part of the miracle where the giant hailstones fell precisely on their enemy in a specific valley and nowhere else.  Second, this idea assumes that Joshua had not been tracking the sun at all that day, nor the length of time of the battle, nor the length of time of a typical day; had no knowledge that a solar eclipse was occurring, but was surprised by the eclipse and didn’t understand them; was confused at what was happening, and decided to ask God for a miracle to extend the day because he was running out of light; and then was so confused that he would later thank God for a time-extending miracle that anyone with clear skies would know didn’t really happen.  Third, it assumes that Joshua and his armies only needed one extra hour of sunlight to finish off their enemies, when the Bible says that the sunlight lasted for “about a whole day” not the normal “half-day”. Fourth, it conveniently ignores the fact that this event was said to be so monumental and notable that there was nothing else like it in history, when the Lord “listened to the voice of a man.”   Fifth, it suggests that one of God’s greatest and self-stated miracles He ever brought about, was simply a pre-planned natural event that would have happened anyway, diminishing God’s own words about it and turning God into a smooth operator, if not an outright liar.

This watered-down explanation of a Biblical account is a consistent pattern for Colin Humphreys. He wrote a book on the Exodus that attempts to explain its occurrences as having been fulfilled by natural events rather than outright miracles. By the way, how and why the paper he published in October 2017 with W. Graeme Waddington, is practically identical to, but did not give credit to the January 2017 published work by three Israelis: physicist Ḥezi Yitzḥak, Bible scholar Daniel Weinstaub, and archeologist Uzi Avner, in the Hebrew journal Beyt Mikra should be further clarified. Yes, the Israeli journal was in Hebrew, but does Humphreys claim to have hit upon this idea independently?

But the even bigger problem is that Joshua’s long day could not possibly have occurred in 1207 BC, if you believe the biblical account. Why?  Because 1 Kings 6:1 says that the building of the First Temple began 480 years after the Exodus. Let’s do the math. We know Joshua’s battle occurred soon after the 40 years of the Exodus journey. Taking the date of 1207 BC and advancing it 440 years into the future puts the construction of the First Temple at 767 BC, which is 200 years after the traditionally accepted date of 970 BC, and still 65 years later than the very latest date I have ever seen proposed for this event (832 BC in the Jewish Seder Olam).

Now such academics would respond that 1 Kings 6:1 is simply wrong, but that does not explain away the detailed step-by-step history of Israel in the land listing every judge and king, and the impossibility to compress every event in Joshua, Judges, Ruth, and Samuel to fit between the mere 237 years from 1207 BC to 970 BC. For a lesser known example look at the words of Jephthah in Judges 11:26. For more details on why the date of 1250 BC is at least 200 years too late, look at the documentary Patterns of Evidence.

How did the academics get to the idea that the Exodus was in 1250 BC in the first place? Oh, what a sad, sad, story of bait-and-cut-fish, rather than fish-and-cut-bait.

While they are quick to water down or reject almost any other verse in the Bible that suits them, the experts have decided that there is ONE particular verse that HAS to mean exactly what they think it means: Exodus 12:37 which says that the children of Israel journeyed from the city of Rameses to Succoth when they left Egypt. Based on the generally accepted historical timeline for Egypt, and the insistence that the city of Rameses did not come into being with that name until 1250 BC, the experts say that MUST mean that the Exodus, if it even occurred, must have occurred around 1250 BC.  That’s the bait. But then based on that, they date every other biblical event according to that assumption, and then wonder why they can find NO corroborating evidence in that time period.  For instance, the charred cereal grains burned in the collapse of the walls of Jericho, date to around 1600 BC – 1400 BC in studies by Watzinger, Kenyon and Bruins, not the 1210 BC that would have been expected by the 1250 BC theory. Then, finding no corroborating evidence in the expected time periods, the academics claim that the Exodus, the defeat of Jericho by Israel, and many other events are just myths. They bait and cut fish, rather than fish and cut bait.

Into this preposterous situation of the Exodus occurring around 1250 BC, Sir Colin John Humphreys, British physicist, now publishes that he has found the date of Joshua’s battle, in 1207 BC, fitting nicely with the 1250 BC idea, and telling us that it was not a true miracle, but a matter of precise timing and confusion. He after all, is only trying to “help us all out” by explaining what is admittedly not so easy to explain otherwise. At least he believes these events happened at all, which sets him apart from other academics.

Here is what I think:  Let’s be content to let God be as big as He claims to be, and to let our reputation stand and fall with His.

The easiest way for God to keep the daylight going for 24 hours over Israel than just 12, some two hundred years earlier than 1207 BC, would have been to slow down the earth’s rotation from 1,000 miles per hour at the Equator to less than 100 miles per hour, (no need to stop it completely), keep the earth spinning at that slower rate for about 12 hours, and then to slowly speed it up again. Interestingly the best time to achieve this safely around the world would be Fall or Spring, when no part of the planet is suffering from extreme heat in the daytime, or extreme cold at night.

Let us not try to help God out, or try to water down all the amazing, seemingly contradictory, and even mind-bending claims that He makes in His own book. To reduce Him until He fits within the set established patterns of the natural world (e.g. a solar eclipse) or of the academic world (i.e. a wildly incorrect 1250 BC Exodus date), is not going to work.

He won’t ever fit in a little box! Indeed, not even in the biggest box that we could ever imagine.

Bob O’Dell is co-founder of Root Source along with Israeli Jew Gidon Ariel. Root Source makes orthodox Jewish teaching available to Christians worldwide over the internet to enrich the roots of their faith. Gidon and Bob have co-written Jubilee Now and Israel FIRST! which seek to explain many historical and natural events from a Jewish and Christian perspective.