Last time we speculated that Lucifer’s sin and subsequent fall from heaven may have been precipitated by a jealous belief that he was going to be subsumed and replaced by mankind, which was being created in the image of God.

This time we’ll look to see if replacement theology played a role in the original sin of Adam and Eve.

Our story for today begins in Genesis 2 when God told the man:

The Lord God commanded the man, saying, “From any tree of the garden you may eat freely; 17 but from the tree of the knowledge of good and evil you shall not eat, for in the day that you eat from it you will surely die.” Genesis 2:16-17 (NASB).

After that God decided that it was not good for man to be alone and formed Eve from Adam.

Then in Genesis 3, the serpent was introduced as posing a crafty question to Eve:

Now the serpent was more crafty than any beast of the field which the Lord God had made. And he said to the woman, “Indeed, has God said, ‘You shall not eat from any tree of the garden’?” 2 The woman said to the serpent, “From the fruit of the trees of the garden we may eat; 3 but from the fruit of the tree which is in the middle of the garden, God has said, ‘You shall not eat from it or touch it, or you will die.’” Genesis 3:1-3. (NASB) 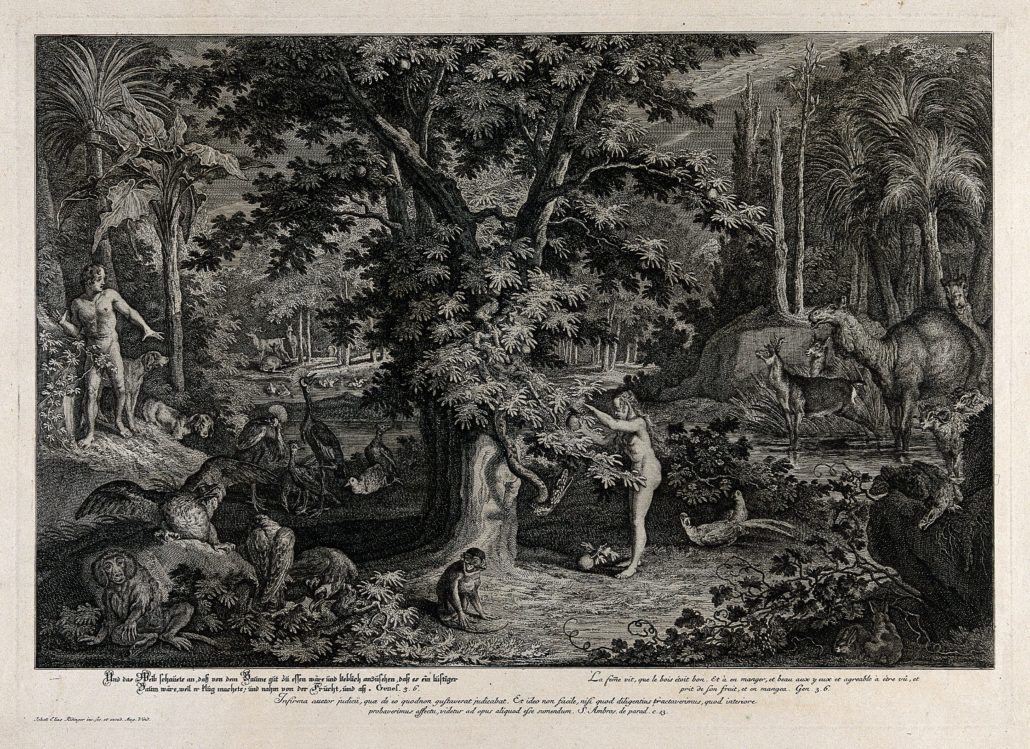 J.E. Ridinger Etching, c. 1750. (Photo by Wellcome Trust, a global charitable foundation based in the United Kingdom and Wikicommons)

Notice here that Eve, who was not even formed when Adam received the command from God, had wrong information about the tree. She told the serpent that touching it would kill them, and this incorrect understanding was exploited by the serpent to persuade her to believe that God was lying about the tree entirely.

Jewish practice today includes a beautiful safeguard concept referred to as “fencing the Torah.” This means that they set the limit of their behavior a little bit back from the edge of right and wrong, giving themselves a safety margin. For example, while the Torah gives the entire night to say the bedtime Shema (or Shma as stated in Deut 6:5), in practice the Jews make sure to say it before midnight.

This is perhaps what Adam was doing when he relayed God’s commandment to Eve — it would be quite reasonable that he should not want her to even touch the tree, as a matter of safety. However, in Jewish practice, the fencing of the Torah is never done in secret. Jews are taught God’s commandment as well as the existence of the fence. If the Jews agree together that as a people they will practice a certain safeguard, they do not redefine the Torah as if God’s original commandment had read: “Stay behind the fence.” But apparently, when he relayed the commandment to Eve, Adam did not distinguish the difference between God’s Torah and the fence.

I believe that this was probably “the original mistake.” And it fell completely on Adam. He stood in the position of God and enlarged one of God’s commandments when he relayed it to Eve. Whether it was an unintentional mistake, or a misunderstanding between them, or a deliberate concealment by Adam, we don’t know, but this story strongly implies that the very first act of replacement on Earth came from Adam himself. He replaced one commandment with a larger one.

However, that original mistake is not referred to as the original sin. That only came upon the actual breaking of God’s original command not to eat of that tree. And this sin fell first upon Eve. Can we find replacement in Eve’s story as well?

Was Replacement Theology Present with Adam and Eve?

To see it, we must put ourselves in the mindset of Eve.

When Eve was formed by God she quickly learned that Adam had been formed first. Certainly Adam told Eve about that one command he had received from God. There is absolutely nothing wrong with Adam taking on a certain positional authority, by relaying the commandment to Eve! If God did not want this to happen, then He would have waited to reveal His command to both of them at once. So this positional authority that Adam had by being formed first, was not lost upon Eve.

Later, after being tempted by the serpent, when Eve took the fruit off of the tree, and did not die, she had a decision to make. Would she discuss this amazing situation (of touching the fruit and not dying) with Adam? Would she offer it to Adam so that they would then eat it simultaneously? Or would she move quickly and eat on her own?

She rushed ahead and ate. Why?

To see the replacement in this situation, we must ask ourselves: had Eve gotten from this fruit what she wanted to get, how would her relationship with Adam have changed?

The promise that the serpent made to Eve regarding the fruit was a new kind of existence — to live at a higher level than ever before. And by eating the fruit quickly, on her own, Eve obtained something very useful, something that could never be taken away from her. Can you guess what that was?

Think for a minute on your own before reading further, and then read the answer below this line!

Eve would have obtained, for the rest of eternity, the honor of being first. Yes, Adam might have been formed first, but she would be the one to lead mankind into this new higher place of living. Eve, whether consciously or not, was making a play for a new kind of positional replacement over Adam.

Lucifer railed against God in order to keep Adam from replacing him. Then when that failed, he offered Eve the same thing — the chance to replace Adam as the first one into a new kind of existence that Lucifer had also desired. Yes, the original sin initiated by Eve involved pride. But her pride was sweetened by the chance to replace Adam and be first human being into this new kind of existence.

Replacement, as a sin, did not have its beginnings in the Christian attitude towards Jews.

It is a whole lot older.