The following is a guest post by Ray Montgomery:

When I first approached Bob with the idea that Root Source should “do something” about the sins of our Christian past on the 9th of Av, I never expected that I would now be telling you my own story. But I do believe it is important to share a second example of the impact that the truth can have. I found that this story was painful to write, which surprised me. I had thought that having gone through this process a few years ago I could now consign it to an intellectual enterprise of simply writing an article, but revisiting it brings back those same feelings. Not as vividly perhaps, but definitely ever-present, disquieting, and humbling.

“A picture is worth a thousand words.”

Two weeks ago Bob described how in 2013, God used the Blood Moons as “cheese” to send him off to learn Jewish history. My story began in 2009, and it began with a request from a friend to explain a complex teaching from our pastor about how the 7 Churches in Revelation 1-3 and the 7 Parables of Jesus in Matthew 13 have had an historic fulfillment covering the last 2,000 years. While I understood it intellectually, it was difficult to convey in an easily understandable way, so I decided it would be easier if I presented it in a spreadsheet. This way he could get a quick visual impression at first glance – a picture being worth 1,000 words.

But that was only the beginning, for the project quickly took on a life of its own. I decided to add columns for centuries, 99 rows for individual years within each century, and next to the year a brief description of the event, such as:

and so on. I filled in empty cells with general historical information (e.g. “1666 Great fire of London”), and noticed that as I went on, a lot of items were related to the Jews, such as Titus destroying the Temple in Jerusalem in 70 AD. As Christianity wouldn’t have existed were it not for its Jewish roots, I started to research Jewish history as well, in order to flesh out my own Timeline and start filling in a few more gaps. Little did I know where this largely intellectual pursuit would lead.

I began by finding several websites that documented Jewish history, and went through them one by one. This was a long process, for I had to determine if there was room to add the event into my Timeline, and if so, somehow condense that information into a description of about 50 characters. This meant there was a lot of reading to do, a process that eventually ended up taking a few months of evening study to finish.

I focused on the smaller websites first as they were relatively quick and easy to get through. But one website was particularly comprehensive, so I left this till the end. As I went through this website, year-by-year, century-by-century, I noticed that I began to feel quite depressed. Given that I was only up to the year 1000 at this point, and knowing some of the “biggies” to come (Spain expelling the Jews in 1492, and the horrors of the 20th Century culminating in the Holocaust for starters), I wondered how much worse it could get. But I plowed on.

And of course it did get worse. Much worse! Jews have been faithfully recording, transcribing and copying their scriptures for millennia, so it made sense that they would faithfully record their history as well. And as the centuries went on, it seemed that every year there was yet another atrocity that had been carried out against them. And what I began noticing was that a good many of these atrocities had been carried out by Christians.

It was one thing to have learned of the horrors the Jews have faced throughout history, but I couldn’t believe how much had been perpetrated by Christian hands. What was worse was how little of this I knew. While most of us are aware of the broad brushstrokes of our bloody history covering the Inquisition, the Crusades, Jewish expulsions, and finally the Holocaust, how many of us know, for instance, about the other atrocities committed against the Jews over the last two millennia? Worse yet, how many of us even truly care to know?

To take one example from many I could list after my research, how many of us know that it would only take about 100 years after the deaths of the apostles before someone would accuse the Jews of deicide? In 167 AD Melito of Sardis wrote:

“The Lord is insulted, God has been murdered, the King of Israel has been destroyed by the right hand of Israel.”

His preaching would later inspire pogroms against the Jews.

How many of us know that the seeds of what became known as Replacement Theology (which teaches that the Jews are no longer God’s chosen people and that the Church has replaced Israel in God’s plan for mankind) were sown just 13 years later (180 AD) by Irenaeus, a Greek cleric who helped develop Christian theology, when he wrote:

“The Jews have rejected the Son of God and cast Him out of the vineyard when they slew Him. Therefore, God has justly rejected them and has given to the Gentiles outside the vineyard the fruits of its cultivation.”

A doctrine that was to take shape under St. Augustine, a Doctor of the Church, who wrote in 415 AD:

“The Jew can never understand the scriptures and forever will bear the guilt for the death of Jesus.”

A doctrine that would reach its full expression in Martin Luther’s anti-semitic writing “On the Jews and Their Lies” – yes, that same Martin Luther who was responsible for launching the Reformation in 1517 – in which he advocated:

This work, written in 1543, contributed to the rise of anti-semitism in Germany, and led Himmler to write admiringly of Luther’s writings and his sermons on the Jews in 1940, which ultimately led to Hitler and the Final Solution! 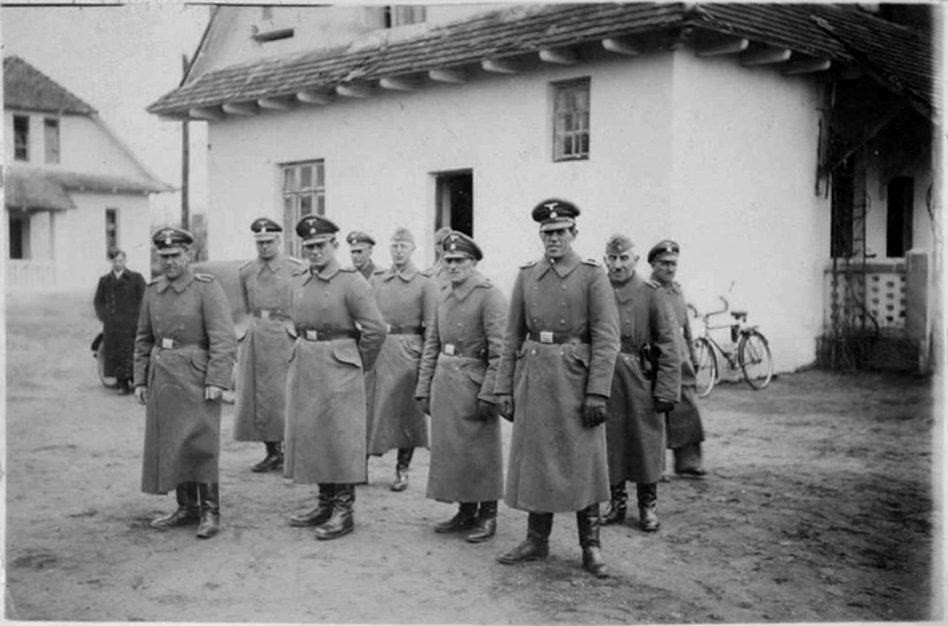 Nazi’s Pose Outside of a Death Camp (Photo: Public Domain)

This doctrine, as comprehensively detailed by Luther, would lead the philosopher Karl Jaspers to summarise:

“There you already have the whole Nazi program.”

Bob pointed out in his article last week that “that which is spoken or written about Jews in one century, becomes an action in a later century.” My own independent research confirms this. And no one sums it up better than Stephen Covey’s famous aphorism, which says:

Sow a thought, reap an action;

Sow an action, reap a habit;

Sow a habit, reap a character;

Sow a character, reap a destiny.

And what a hideous destiny the Jews have reaped from our original Christian thoughts and doctrines!

More to the point, how could I not have known any of this? Why had it taken years of personal research of Christian history, and a painful 3-month examination of Jewish history, to discover? It’s almost as though it has been a shameful secret so terrible that we simply don’t want to face it, lest we be confronted with the horrors of the past and have to do something about it. Has it been, essentially, a conspiracy of silence? And now that I knew about it, what was I to do with it? To remain silent would be to give tacit approval to it. So how was I to process this?

When I finally finished, I was undone. For days I could say nothing. I felt sick to my stomach. I descended into a deep depression. Each evening spent researching yet more atrocities had had a compounding effect on me, and was something I didn’t know how to process. I couldn’t even console myself with the vain thought that although I hadn’t committed any of these acts myself, I therefore wasn’t responsible. So why was I feeling so guilty? But I did, and I couldn’t shake it. All I could think of was Exodus 34:7:

“Yet he does not leave the guilty unpunished; he punishes the children and their children for the sin of the parents to the third and fourth generation.”

The Beginning of Repentance

I finally realised that my spiritual forefathers had committed untold atrocities against the Lord’s chosen people, the Jews, and therefore what was now weighing heavily on my shoulders was their collective guilt. What had started out as an intellectual curiosity had now become personal. All I could do was to start crying out to the Lord in repentance and ask for His forgiveness. And it would take weeks of repentance to shift two thousand years’ worth of guilt. In some small way I think I was feeling something of the grief that the Lord had had to witness throughout history, His creation turning on itself and tearing itself apart. And I was broken.

However, my story does not end there, and neither does Bob’s. Both of us found our way out of this dark place, that metaphorical dark cave of Jeremiah, into a place of life and joy and peace. We will both be telling those parts of our collective stories as well, but not until the 9th of Av has passed.

Would you be willing to join us and examine the truth for yourself on the 9th of Av – that is to say, beginning sundown on Saturday July 21, through sundown on Sunday July 22?

If so, please sign up below to receive our materials.