This article continues the story I began telling in article 007.

It was the 9th of Av on July 16, 2013. I was in God’s trap now. My research on the Blood Moons had forced me to study Jewish history, and here I was taking one minute to consider each atrocity against Jews in the name of Christ. I was getting overwhelmed. I also could not believe that I had never heard about these things in my fifty years of life. Most astounding was the complete absence of systematic retaliation by the Jewish people against their perpetrators. Jews were being wronged, and yet their restraint (the lack of repaying evil for evil) was more righteous than ours.

“This is crazy and incredible!” I thought. Eventually, I became ill and had to stop.

As much as I wanted to try to “fix it,” I felt my instructions from God were to simply look at the list, not rush to “fix it” with prayers of repentance. And yet in this uncomfortable place of knowing the truth, and having no way to fix it….something began to happen inside me in the coming days and weeks.

The Weeks that Followed

First, I began to replay in my mind the almost daily interactions that I had had with Jewish people over the last 25 years in hi-tech, especially those times in which I was proactively trying to bring my faith into the conversation. I suddenly realized that I had been carrying something hidden in my heart those 25 years: a feeling of superiority for having Jesus living inside me. I now understood that I had broken Paul’s admonishment to us Gentiles in Romans 11:20: “Do not be conceited, but fear. Because if God did not spare the natural branches, he will not spare you either.” So I let it go: not letting go of Jesus as my Lord; but letting go of the arrogance that I carried for having a relationship with Him.

Next, my Blood Moons research, and the desire to see how every Blood Moon over the last 2,000 years fit perfectly into Jewish history — that drive to solve the mystery — started to fade away. It was like when you let your foot off the accelerator — the car doesn’t immediately stop, it just starts slowing down. Over the coming weeks, the will to “discover something really important” and to write a book about it, faded away.

I had more important things on my mind. What was I to do with what I had just learned? It’s not like that’s all I thought about continuously, rather it was like a ball on an elastic string. You hit the ball and it goes out, but then it would just come back time and again, without any answer.

Then came our planned summer vacation to take my wife and two grown daughters to Israel, with three days in Tel Aviv and seven days in Jerusalem. I had travelled to Israel over 30 times in my hi-tech career, and have visited almost 20 times since. But something amazing happened on that particular trip, something that has never happened before or since. I found myself being asked time after time after time:

Now, for sure I’m not Jewish, and becoming one was never a goal for me. But looking back, I believe some kind of wall between me and the Jewish people had come down. Jewish shopkeepers, people on the street, taxi drivers and hotel clerks all made me feel connected to them in a way that felt pleasant and safe. I suppose those questions were coming as a response to what Jews were sensing from me.

It was not until Yom Kippur 2013, about eight full weeks after the 9th of Av, that I felt it was time to write and pray prayers of repentance to God. After that powerful second encounter, I felt my time of mourning was over.  It was time to move on, but still the ball on the elastic string kept coming back to me asking each time: what should I be doing differently?

It didn’t take very long after Yom Kippur before an idea was born in me to do something differently. I knew I could not fix the past. I knew that apologies today cannot undo the damage, even though there is nothing wrong with apologizing. I knew by training that living with guilt is dangerous and unhealthy. Ray, my collaborator on this antisemitism project, told us in a prior article he felt he carried some of that collective guilt of the past. But for me it was more personal — a sense of responsibility to do something productive to do that could allow me to “walk in the opposite spirit” of those sins of the past. What I decided to do was to use my skills in starting organizations and businesses, and use those skills to assist Orthodox Jews in Israel.  I bought plane tickets to travel to Israel again at the beginning of January 2014, and see if God would lead me to connect with Orthodox Jews who were interested in starting organizations or businesses. I had decided to leave hi-tech much earlier, but now instead of starting my own new company, I would direct my time and experience to be a blessing to Orthodox Jews in their ventures.

It was that decision that turned out to be the most important one of all for those reading this column. Because every one of you has been positively impacted by Root Source!

A Christian leader, Christine Darg, invited both me and Gidon to speak at a conference in January 2014. One of the main activities of that conference was to pray for Jerusalem on the Walls of Jerusalem. 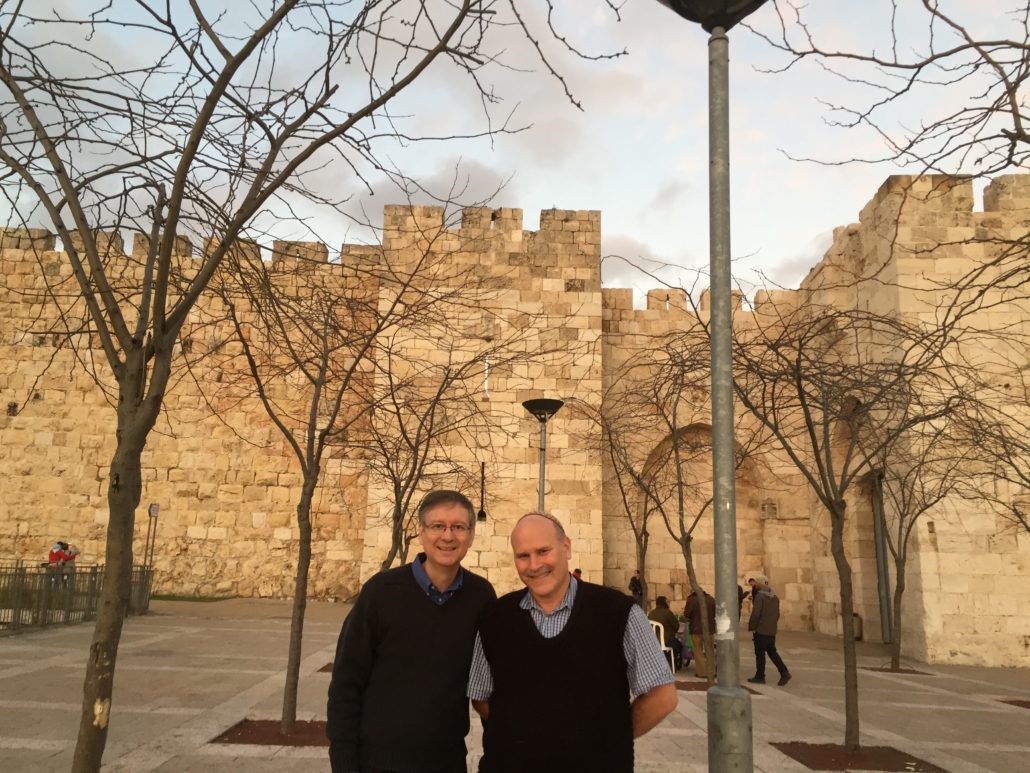 Bob and Gidon First Met on the Wall Behind Them

While standing on the walls of the Old City of Jerusalem, speaking to a group of Christians, Gidon Ariel shared his new idea for what would become Root Source. As soon as he shared that idea, the Holy Spirit said to me:

So I put aside my fanciful idea of consulting with many Jews at once, and put all my energy into helping one man, Gidon, make his idea a reality. This was a big change. I was letting go of my desire to write books on end-times prophecy, my desire to start my own company, my desire to run my own Christian ministry, and instead I would simply humble myself and help one Jew in Israel launch his idea!

But as Gidon and I began to discuss his vision in the days that followed, Gidon would hear nothing of my plan to be a hidden “behind the scenes consultant”. He thought the right relationship and organizational structure would be for me to be “his partner.” I resisted because of promise I had made to God to play a secondary role. Eventually, I felt a peace inside that Gidon was speaking God’s will. Later I saw Gidon’s insistence as fulfilling the words of Christ in Luke 14:11: “he who humbles himself will be exalted.” So I began to call Gidon “my CEO” and he began to call me “his partner.”

Yes, the story of Root Source is inextricably tied to the 9th of Av! That’s where it started. And out of that humbling shift of trying to make Gidon’s idea successful, rather than develop my own work on the Blood Moons, came the larger theme of Root Source itself. The theme of Root Source is multi-fold: in blessing Israel and in learning from Jews — which is an act of humbling oneself — a Christian can be enriched in ways both expected and unexpected.

And speaking of the unexpected, those who have been around Root Source a while will remember a book that we published on the Blood Moons in 2015, called Israel FIRST! Given that my whole Blood Moons research had faded away in failure, how could such a book ever be written?

Here is the last piece to the story. The Blood Moons project had failed because I was never able to show any consistent historical pattern that the Blood Moons preceded judgment and war, as was being widely claimed. Those claims were not holding up to statistical scrutiny, and I had no other explanation in mind either. But about six weeks after Yom Kippur, (this still a few months before I met Gidon), I got an unexpected surprise “out of the clear blue sky.” A thought occurred to me that perhaps the Christian world was looking at the Blood Moons all wrong — that perhaps we were looking at them “upside down.” (This thought is unfolded in our book Israel FIRST! p.73). Immediately all the patterns of history began to fit perfectly with Blood Moons!  I would carry that beautiful picture inside me for more than a year before Gidon would one day make a suggestion that I record some free videos on Root Source about the Blood Moons. That became the “big break” that Root Source needed.

So in summary, the very Blood Moons study that faded away after 9th of Av, a year-and-a-half later became the very thing that introduced Root Source to the world. Now that’s a marketing strategy that only God could create!

Now Let’s Talk about You

What is the point of this column today? Have you noticed how every facet of this story found its root in the 9th of Av, the traditional day of Jewish mourning and tragedy?  Great good sprung out of an examination of an ugly set of events.

And now you know why Ray and I yearned for each of you that you would take some time and consider the record of the past, as we did.  Our prayer for you was that out of your day spent with THE LIST, that you would find something beautiful too.

If you’ve spent the time pouring over the truth and shaking your head and wondering what it all means between you and Jewish people, Ray and I have a message for you.

Hold on, until you know what this exercise means for you.

If you have taken this difficult assignment to heart, then be encouraged. God knows. God sees. Look for the changes in your life and look for the inspiration and ideas that come from Him. Psalm 34:8 promises that God is near to the brokenhearted.

We purposely waited to begin telling you the rest of our stories until after the 9th of Av. We wanted you to make your decision without any promises from us. But if you did it without our promise, then now we do have a promise for you!

God knows. God sees. We believe you are being positioned to find a place of nearness to Him.