The feedback we have received about THE LIST has been very strong. About 2,000 people downloaded the document and over 200 people took the time to write us back and share their reactions. From that feedback we now see that the vast majority felt like Ray and I did: awakened to the full extent of the tragedy committed against Jews in the name of Christ. While we only asked people to read the document, many went beyond that. Many felt and acted on to the need to repent for the actions of their Christian forefathers.

This article dips its toe into the larger question: whether God might have engineered this effort to be a strategic part of the next revival among Christians. This is not something we even considered at the time of the 9th of Av, but enough readers have suggested this idea to us, that Gidon felt it would be appropriate to let them speak their mind publicly.

Before two of them speak their mind, allow us to set up some background.

The term “revival” is the most common term that Christians use to refer to an extraordinary move of God in a region. Other words used in this way are “awakening”, “outpouring”, “outbreak”, “renewal” or a “movement”.

Perhaps the largest such event recently has been happening in the house church movement in China. Others might argue for parts of Africa. But the rest of this column will focus on the USA and the UK, because that is the focus of our speakers.

In the USA, the largest revival that happened in our lifetimes was the Charismatic Renewal of the 1970s, related to and sometimes called the Jesus Movement. Interestingly, its beginnings can be traced to the period of 1967. The year 1967 also marked the year which began a renewal of interest in the Jewish roots of Christianity, which found its expression most visibly in what has been termed the Messianic Movement, or more recently the Hebrew Roots Movement.

Prior to 1967, the great revivals in what we now know as the United States, were called the Great Awakenings.  The first Great Awakening came in the 1730s and 1740s, which corresponded in time with the Methodist Revival in England.  The Second came in the 1790s, and the third in the 1850s. More recently, the Welsh Revival in 1905 was followed by the Azusa Street Revival in California in 1906, which launched a wave of interest in the presence, manifestation and empowerment of the Holy Spirit. The Charismatic Renewal of the 1970s renewed many of those features of the Azusa Street Revival, while bringing many young people to faith (or back to faith) in Jesus, thus the term the Jesus Movement. 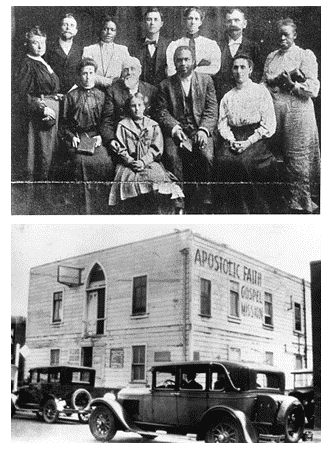 Azusa Street group with William Seymour center right, and the building where many meetings were held. (Photos: Wikicommons)

No revival in Christian history has ever occurred without transformation: of people “returning” to godly living, of people confessing and letting go of sinful and damaging habits, and of renewed interest in God and the study of the Bible. Out of revival, Christians read the Bible in fresh new ways and “see” verses as applicable to them, that others have ignored.

But how does revival begin? Historians all agree that revival, when it happens, is always preceded by small groups of people who pray and repent. One of the most often-quoted scriptures, and the one that has provided guidance for “how to pray in” a revival, is a verse Christians borrow (whether they realize it or not) from the nation of Israel when they pray:

“When My people, who bear My name, humble themselves, pray, and seek My favor and turn from their evil ways, I will hear in My heavenly abode and forgive their sins and heal their land.”  2 Chronicles 7:14 (TIB)

But “repent” is a general word. Are there not many things of which we could repent? The central idea being proposed by two women below is that perhaps God is saying the time has now come for the entire Christian world to begin to repent of our treatment against Jews in the last 2,000 years.

These women, and others who have written us, consider the possibility that God might want to use THE LIST to reveal the depths of past sins, and to reveal underlying heart issues which are still present in the larger church today.

Great article Ray, and so moving. Your story and Bob’s ring true and it is no coincidence that the Lord has placed this issue of repentance for past sins committed by Christians against the Jewish people on both your hearts for such a time as this. He raises up those that He wishes to use for His purposes (Exodus 9:16).

One thing that has been on my mind since this whole issue of Christian persecution of the Jews and repentance has been the need for revival. Could our heartfelt and sorrowful repentance for these acts, bring about the revival that the Church so desperately needs? In reading about past revivals, you often read of how they involved deep levels of repentance.

Richard Bewes wrote the following in an article titled, It Begins with Repentance, for the Billy Graham Association in October 2015, “In the great East African Revival—within which I was born and raised as a child of missionaries—widespread conviction of sin was followed by heartfelt and practical acts of repentance, as men and women turned to the cross of Christ by the thousands. Government officials were dumbfounded at the volume of stolen axes, hoes and other agricultural implements that were handed in by the repentant. Many convicted of their sins would, if necessary, walk 20 miles to right certain wrongs.”

Frank Bartleman’s statement from the ‘Azusa Street’ Revival: “I received from God early in 1905 the following keynote to revival: ‘The DEPTH of revival will be determined exactly by the DEPTH of the spirit of REPENTANCE.’ And this will obtain for all people, at all times.”

Here is one last quote on this subject from Evan Roberts of the Welsh Revival: “First, is there any sin in your past with which you have not honestly dealt, not confessed to God? On your knees at once. Your past must be put away and cleansed. Second, is there anything in your life that is doubtful, anything you cannot decide whether it is good or evil? Away with it. There must not be a trace of a cloud between you and God. Have you forgiven everybody – EVERYBODY? If not, don’t expect forgiveness for your sins…”

These quotes show how important repentance is to revival. The fact that there has not been more repentance for the atrocities committed by the Christians against Jews is due in part to lack of knowledge (Hosea 4:6) but also to hard-heartedness (Romans 2:5), both of which we are warned against in the scriptures. I, too, love Corrie ten Boom and I end with this quote from her, “Four marks of true repentance are: acknowledgement of wrong, willingness to confess it, willingness to abandon it, and willingness to make restitution.”

Laura Densmore, who also believes that revival could be coming soon, writes from the vantage point of repentance as a “return to Torah”. Laura writes:

What keeps us from repenting? It is pride and self righteousness. If we have been in church for very many years, we can develop the mindset, “Well, I am all right. This is pride. It can be very subtle. It likes to be cloaked, to be hidden, it may not be overt. We begin by repenting down pride. And then we can get to the rest of the sin behind that wall.

What motivated Daniel to pray the prayer of repentance for himself and his people in Daniel 9: 1-19?  He had been studying in the word in Jeremiah that the time of the exile in Babylon for Judah would last for 70 years. (See Jer. 25:11-12, and Jer. 29:10). And then he understood that the 70 years were nearly up. He also knew that if he and his people were going to come out of exile and be allowed to return to the land of Israel, that they needed to repent and return to the Torah. He was following the pattern of repentance found in Leviticus 26:40-42. Daniel confessed the iniquity of his people and of his forefathers. He was very specific to say that they had departed from following the Torah. This is what got them kicked out and evicted from the land:

We have sinned, and have committed iniquity, and have done wickedly, and have rebelled, even by departing from your precepts and from your judgments: Neither have we obeyed the voice of the LORD our God, to walk in his laws, which he set before us by his servants the prophets. Yea, all Israel have transgressed your Torah, even by departing, that they might not obey your voice; therefore the curse is poured upon us, and the oath that is written in the Torah of Moses the servant of God, because we have sinned against him.   Daniel 9: 5, 10-11  (KJV)

What The LIST does is expose and reveal the sins of our church fathers in a way I have never seen before. We in the church have been so blind for so long a time, spanning the centuries. What The LIST does is it shows us the big picture, the sweeping panorama of sin that our church fathers have committed against the Jewish people over the centuries.

What the list does is expose two very important things for which we can repent:

What was that mindset/doctrine?  It is the notion of “Replacement theology”, that the “church” has replaced Israel/Jewish people, and that all the covenants and promises made to Israel/the Jewish people are null and void, that those covenants and promises are now for “the church”. It is the notion of Age of Law/Age of Grace, that the Torah was nailed to the cross, and we are now living in the “Age of Grace”.  It was this TURNING AWAY from the whole counsel of the Word of God.

As these “sins of our church fathers” is exposed in this document, my prayer is that this document would be used by the hand of God to be as a “jackhammer” to break up the cement-like places found in our hearts, that it would be used as an instrument to bring about deep, heartfelt repentance.

May we weep over the things that causes God to weep, and may it be His tears that slide down our cheeks.

In Hindsight and in Foresight

Back in 2016, I was able to speak in the Old City of Jerusalem on Saturday night, following the first full day of Passover. The event in Jerusalem was a conference held by Christine Darg, during what we suspected was the Jewish Jubilee Year of 2015-2016. We cried out for revival from Jerusalem.  It was a special time.

What is specifically going to happen regarding revival in the months and years ahead?  We don’t know. But what I do know is that every one of us has a job to do. Every one of us needs to do that which God puts in front of us to do. When enough people do their part, revival will come, redemption will come, and ultimately Messiah will come without any unnecessary delay.