Cornelius was a Roman Centurion who became the first Gentile “Christian,” the first non-Jewish man to become a follower/disciple/believer in Jesus/Yeshua the Messiah. The Principle of First Mention says that one should pay special attention to the first occurrence of a word in the Bible. 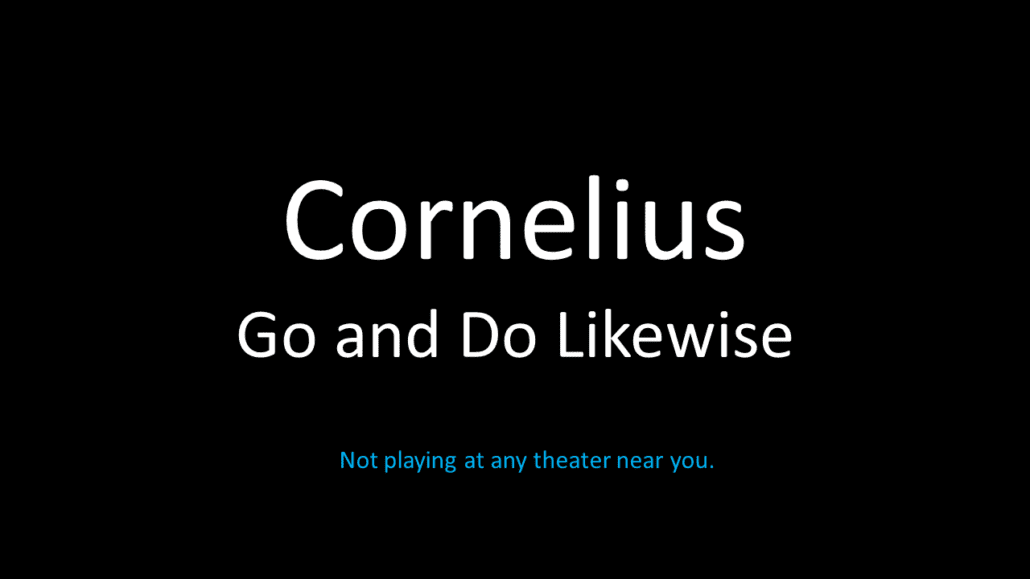 Therefore, as per that First Mention principle, what can we who are non-Jewish believers learn from this first Gentile disciple? A great deal, if we see him as a foundational example for all of us and do not fall into the trap of viewing him as a “special case.” Allow me to show what this story says to me, beginning in Acts 10:1.

Now there was a man at Caesarea (NASB)

This story does not begin in Rome, nor in any of the “nations”, but right in Israel, on the coastline. Yes, Caesarea was a Roman city, with all the pagan trappings of such a city, but yet it WAS in Israel. A stone’s throw from the Mediterranean. Just barely in Israel, BUT THAT WAS ENOUGH. The lesson I take from this is that God’s blessing is available for those who visit THE LAND of Israel, who are willing to spend any amount of time there.

named Cornelius, a centurion of what was called the Italian cohort,

Cornelius’ job made him give his loyalty to Caesar, and he came from Rome of all places, the center of antagonism towards the Jews. Apparently, God loves to use someone from the most unlikely place. Do you feel like your own history makes you unlikely to be used by God? Think again! It is in God’s nature to use the unlikely.

a devout man and one who feared God with all his household,

Clearly God was at work in this man for some time. We who are Christians are often taught that our journey with God begins after we “accept Jesus into our heart.” Yet, this phrase shows God was at work well before that, in the case of Cornelius, and that God had also been at work in his entire household, and in many under his influence.

and gave many alms to the Jewish people

and prayed to God continually.

Besides giving, Cornelius spent his other most precious commodity — TIME — in pursuit of a relationship with God. What is God telling us? Is He not giving us hints about what has prepared Cornelius for the amazing favor of God that would soon be coming his way?

About the ninth hour of the day he clearly saw in a vision an angel of God who had just come in and said to him, “Cornelius!”

The favor of God begins from RELATIONSHIP as well. Cornelius was known to God, and God sent an angel to call him by name! God honors the relationships that Cornelius was willing to build with His Jewish people, and then surprises Cornelius with an invitation to hear directly from His messenger.

And fixing his gaze on him and being much alarmed, he said, “What is it, Lord?” And he said to him, “Your prayers and alms have ascended as a memorial before God.

God informs Cornelius that the key reason he is being favored by a visit from the angel, was that he had turned to God in prayer, and had given alms to the Jewish people! Do you want to be overwhelmed by the favor of God, and to have supernatural visions and visitations from God? The are many Christian books that tell stories and give advice about how a person can position themselves to experience the presence of God in a stronger way. But in this case God clearly tells Cornelius that God has been touched by his prayer and his alms to the Jewish people. Why is this second facet being generally ignored in prophetic circles!

And now jumping to verse 22, Cornelius dispatches his servants to the town of Joppa, where Peter was staying. Their description of Cornelius to Peter is:

“Cornelius, a centurion, a righteous and God-fearing man well spoken of by the entire nation of the Jews…”


How in the world would Cornelius have come to be known by the entire nation of Jews? I spent some time researching the topic, and ended up producing a fictional skit of Cornelius coming back to our day and time and telling us his story. The skit envisions Cornelius trying to walk the fine line between his allegiance to Rome demanded by his career, and his inner sense that the Jewish people were “on to something” with their worship of the One Almighty God. It envisions an event that forced his respect of the Jews to become known far and wide. The video was published on Root Source here. Clearly I am no actor, but you might have a little fun with what I came up with.

Now Cornelius was waiting for them

Maybe in the movies, you can have non-stop action, but in real life with God, there are ALWAYS periods of waiting. Periods that test our faith! Cornelius may have calculated how long it would have taken for Peter to jump onto one of the horses his servants took to Joppa (today Yafo) and ride back to Caesarea. But Peter decided to walk! Cornelius had no option but to wait, and neither do we!

and had called together his relatives and close friends.

Cornelius was willing to put his reputation with his own family on the line. He believed in the goodness of God and wanted that goodness to be extended to those within his domain.

When Peter entered, Cornelius met him, and fell at his feet and worshiped him. But Peter raised him up, saying, “Stand up; I too am just a man.” As he talked with him, he entered and found many people assembled.

Whenever a shift occurs in history, there is always a period of confusion, and a propensity for error. This devout man Cornelius got so focused on that human messenger that God had promised to send, that he confused him with God. (Orthodox Jewish readers may well give a hearty “Amen” to that sentence!) But my purpose is not to debate the Messiah here, but to deal with a very real problem even for the most devout people: it is a very easy mistake to take ANYONE we respect HIGHLY and turn them into an idol. This part of the story could have been edited out of Acts easily by Luke, but it was not. We need to know not only to be careful, but that good leadership always guides us TO GOD, not to THE LEADER.

Now jumping to verse 44, continuing after Peter explains to Cornelius and all his household who Jesus was….

While Peter was still speaking these words, the Holy Spirit fell upon all those who were listening to the message. All the circumcised believers who came with Peter were amazed, because the gift of the Holy Spirit had been poured out on the Gentiles also. For they were hearing them speaking with tongues and exalting God.

While many points could be made here, I want to concentrate on the main one. Jesus promised his disciples that the Holy Spirit would be poured out upon Peter and the other disciples, and now that very same gift was being offered to the Gentiles. We Gentiles should therefore not disdain the that gift today either.

Then they asked him [Peter] to stay on for a few days.

Cornelius did not run away from instruction, having received the gift of the Holy Spirit. In fact the first instruction he received was from the Jew Peter. And yet Peter ONLY stayed on a few days. Why? Wouldn’t God want to give the very first Christian a full education to get this “Christian thing moving in the right direction?” But the scripture is silent from here on about what happened to Cornelius, and how he moved forward in his life! What we do know is that he was surrounded by a number of Jews. By implication and context, only a very few IF ANY had decided to follow Yeshua as the Messiah. From this we can infer the extremely important point that Cornelius would have continued to have a relationship with the Jews around him.

Can you even imagine a case, where God came to someone and said “your alms to the Jewish people were extremely pleasing to God,” and then that person would walk away from those relationships? Would he not be even more interested in pursuing and growing those relationships with Jews and learning more from them about the ways of God in all aspects?

If you think of yourself as a Christian, you should learn from Cornelius. Cornelius was not just the first Gentile Christian, he was the prototype Pro-Israel Christian! How can we possibly teach other Christians not to be and do likewise?

Cornelius must have engaged in at least some kind of learning from the Jews. This foundational passage does not spell out exactly what that learning looked like, leaving it not at all formulaic, but open and flexible. What is absolutely clear is that Cornelius did what he did in relationship and friendship with the Jews!

Let us go and do likewise.