Paul’s letter to the church in Rome, more formally entitled: Epistle to the Romans, is his longest letter. It has been quoted many times already in our Studio See articles, because it contains many passages that help shed light on (a) how Christians of both Jewish and non-Jewish ethnicity should relate to each other within the church, and (b) how the church should relate to Jewish people overall.

However, the book of Romans also is considered to be a great foundational work in the topic of salvation. That is how I first came to know Romans. Actually reading the book, however, was another story. It was one of the toughest reads in the Bible. I remember sitting in Wednesday night Bible study, ignoring the discussion, while simply staring at the text trying to understand why Paul starts talking about a topic, and then two sentences later, moves on to a completely different topic that seems completely unrelated.

Concerning its complexity, I remember reading a comment by the late author Watchman Nee from China, that I will paraphrase as:  “Romans is not what you read to be saved, it is what you read after you’re saved to explain what just happened.” I carried that meaning of the book in my mind for the next 30 years. 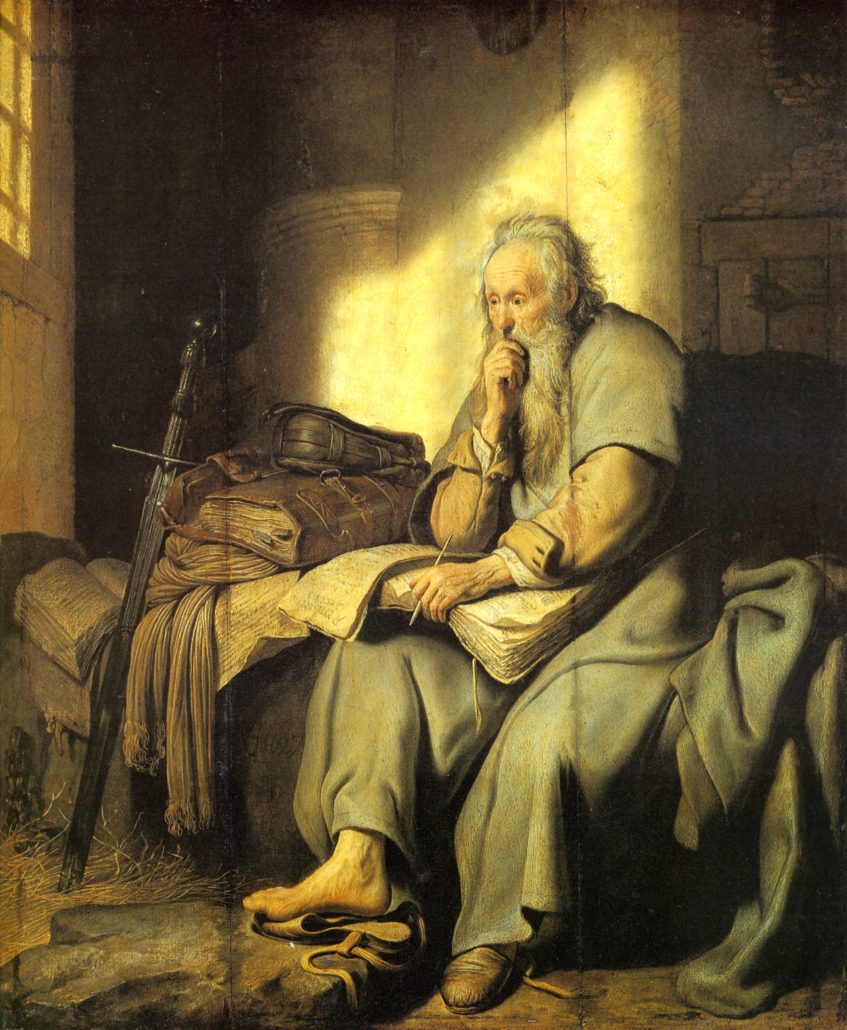 About five years ago, my perspective began to change about the book of Romans through a teaching I heard on Romans 9, 10 and 11 given by a gentile Christian teacher named David Pawson. Pawson has his own ministry out of the UK, but you may know him in that he has crossed paths with the International Christian Embassy of Jerusalem (ICEJ) on many occasions. In a sense, that teaching opened up a door that allowed me to begin to see Romans differently.

Before I continue, I’d like to set some boundaries. I do not mention Pawson because I agree with all he taught in 2008. I do not. Rather, I mention him because God used him to open up a door for me to begin to look at Romans in a new way. Those shared points of agreement are the topic of this column, and I cannot allow anyone to think that I came to these particular things in my personal study. What I share below is that which I had to be taught, that which a godly woman recommended that I hear, and that which I believe every Christians needs to know.

I wonder if only 1% of Christians realize that Romans was written to avert a crisis! It was not written to the church in Rome simply to explain their salvation in Christ! It was written to try to rescue them from a situation that was about to devolve into the first denominational split in the Church!

To prove this we need not rely on extra-biblical sources for proof. We can find everything we need right in the New Testament. What we will see in the New Testament is that the church in Rome had gone through four stages of development at the time that Paul wrote their letter.

The Four Stages of the Church in Rome

The church in Rome, composed of those who were believers in Yeshua, went through four stages concerning its ethnicity:

In stage one, the church in Rome was founded by those who were ethnically Jewish. We can prove this because Jews from Rome are among many locations of Jews listed, who had come to Jerusalem to be present during Shavuot/Pentecost. (Acts 2:10). On that day, a large group including those from Rome had the Holy Spirit fall upon them as recorded in that Chapter. Regarding those from Rome, the verse states that some of those Jews from Rome were not born Jewish, but were proselytes, nevertheless all had converted to Judaism.

As soon as those Roman visitors returned back to Rome, the church in Rome began to form. It would take until Acts 10 for the first true Gentile (who incidentally was also from Rome) to be brought into the church. This is widely believed to have occurred about 7 years after Pentecost. So the Jewish-only church in Rome remained  “just Jewish ” for at least seven years, possibly twelve years or more.

In stage two, as news got around that Gentiles could be brought into the church without conversion to Judaism, the ranks of Gentile believers grew rapidly. Perhaps many of these Gentiles were already “God-fearers” who, like Cornelius, were respectful of Jewish teaching and traditions, but others would certainly have come in without such background. It would be in this period of change that the events of the Jerusalem Council in Acts 15 would be written — that would rule on matters of how Gentiles could/should be brought into the faith.

And then a surprise happened! Stage three was not planned within the church at all, but happened when the Emperor Claudius expelled the Jews from the city of Rome. This was not the first ever expulsion of Jews from a city, but it was one of the first expulsions, and it is the only expulsion mentioned in the New Testament in Acts 18:2.

No reader of this column will be surprised to learn that this ruling included all Jews, whether or not they believed in Yeshua as Messiah. Thus, all Jews had to quickly pick up and move out of the city to find new residence and livelihood. We see this mentioned in the New Testament with respect to a key couple, who became friends with Paul because of the expulsion:

And he [Paul] found a Jew named Aquila, a native on Pontus, having recently come from Italy with his wife, Priscilla, because Claudius had commanded all the Jews to leave Rome. Acts 18:2. (NASB)

Historically we know that the expulsion lasted about five years, after which time Claudius changed his ruling, apparently realizing the mistake he had made.

This brings us to stage four, when many of those same Jews returned to Rome to re-engage in daily life together in the church in Rome. We see this return documented in the book of Romans, when Paul greets a number of the believers there, beginning with that very same couple who had themselves returned:

Greet Priscilla and Aquila, my fellow workers in Christ Jesus, who for my life risked their own necks, to whom not only do I give thanks, but also all the churches of the Gentiles. Romans 16:3.

But the church in Rome now had a problem, a very big problem. In those five years of absence, the Gentile believers in Yeshua had taken over the leadership and administration of the church in Rome. But when the Jews such as Priscilla and Aquila returned, Jews who had previously demonstrated great leadership, courage, and the ability to effectively teach at a high level (see Acts 18:26), were simply not allowed to resume their prior levels of leadership! This can be seen often in the book of Romans itself, even if not overtly, through the very points Paul was making.

Paul realized that the root issue underlying the trouble, was an attitude that had taken hold within the Gentile believing community toward the Jews at large — it was a bigger issue than simply a disagreement about who was capable to lead. Anti-semitism seemed to be present.

It would be THIS BOOK of Romans in which Paul would reveal much of his heart and perspective towards his own Jewish brethren, even as he was often (and wrongly) characterized in that day, and our day as well, as having deserted his Jewish roots and taken up the practice of living as the Gentiles live.

So What’s the Point?

The main point is this. The fact that many church Bible studies on Romans today focus on chapters 1 through 8, and then gloss over 9 through 11, is not only wrong, it is an assassination of the epistle.

Not only are Romans 9 thru 11 worth reading, I agree with David Pawson that those three chapters are the primary focus of the book! They are its summit. They are the intended destination. They are the point he has been working to reach in the entire epistle.

That three chapter summit itself builds to a crescendo, the peak of that peak, in Romans 11, where we who love the Jewish people draw our words so often. Here are a few of my favorites, and you are welcome to add other verses from this Chapter, meaningful to you, in the comments below.

For instance, we see in the very first statement, that God has not rejected the Jewish people!

We see that the Jewish people are holy to the Lord, and the holiness we have as Gentiles springs from theirs:

We see in this chapter also, the foundational concept of being “grafted-in” to Israel.

and you being a wild olive [branch] were grafted in among them and became a partaker with them of the rich root of the olive tree (Romans 11:17)

We see the stern warning that we must in no way be arrogant toward the Jews:

Do not be arrogant (Gentiles) toward the branches; but if you are arrogant, remember that it is not you who support the root, but the root supports you. (Romans 11:18)

We see that despite the disagreements we might have about who the Messiah is, and many other verses in the New Testament, that none of those differences prevent all of Israel from being saved:

And as we put that brief phrase into its larger context, we can also see Paul informing us that what is happening is part of a bigger plan than we might realize. He informs us that the reason that most Jews do not “see Jesus” as Lord and Savior is, itself, to be treated by we Gentiles as part of a mystery:

For I do not want you to be uninformed of this mystery–so that you will not be wise in your own estimation–that a partial hardening has happened to Israel until the fullness of the Gentiles has come in; and so all Israel will be saved (Romans 11:25)

That God’s overwhelming purpose of this mystery is to have mercy on all.

For God has shut up all in disobedience so that He may show mercy to all. (Romans 11:32)

Oh, the depth of the riches both of the wisdom and knowledge of God!

How unsearchable are His judgements and unfathomable His ways! [Job 5:9]

For who has known the mind of the Lord, or who became His counselor? [Isaiah 40:13]

For from Him and through Him and to Him are all things.

To Him be the glory forever.

If you already knew these things, then I celebrate with you, and encourage you to tell others. And if you like me had not heard these things before, then enjoy reading Romans in a whole new light.