I remember hearing of an experiment that took a group of young adults and then randomly split them into two groups. One group were, in this experiment, to become prisoners that would live together in confinement, and the other group were to become their guards, providing for their basic necessities while ensuring that none could escape. As the experiment progressed over a period of days, tensions began to flare between the two groups, and the very feelings that were typical between prisoners and prison guards began to surface. The prisoners began to feel that their treatment by the guards was not fair, and the guards watched as the prisoners’ behavior digressed into actions that were “ungrateful and inappropriate”. The study showed how physical separation and role separation creates a situation that is ripe for emotional separation.

It is human nature. 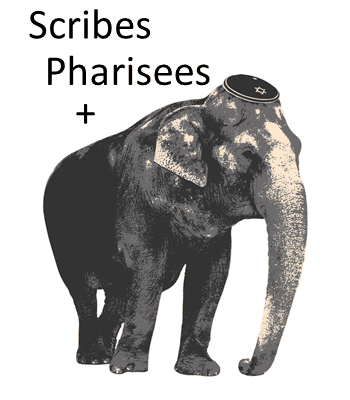 With respect to the Christian side of that separation, there is an elephant in the Christian living room, that I believe has been at the root of much of that separation. An example comes from last week’s story about a woman caught in adultery. The woman did not accidentally bump into Jesus in a small back alley of Jerusalem. She was brought to him by the Scribes and Pharisees as a test, putting Jesus into a seemingly no-win situation.  If Jesus “let her off” then He would be violating Torah. If Jesus commanded that she be killed, then He would be shown to be an extremist: harsher and crueler than anyone in Jerusalem. (For it was not the common Jewish practice of the day, nor was it ever the common practice in Jewish history, to be stoning men and women for adultery, even though such punishment was clearly written by Moses.) An additional complication presented itself that day, because in fact, Jerusalem was not even self-governing, so any action taken by Jesus that day would have been under the full scrutiny of Rome. A sticky situation indeed!

Before we proceed to the main point I’m driving to make, I would like to pause to make a point about the Scribes and Pharisees in the story of the woman caught in adultery. In His famous response: “Let him who is without sin cast the first stone”, not only did Jesus provide a “way out” for the woman, He provided a “way out” for the Scribes and Pharisees too. It was pointed out last week that the older Pharisees left the gathering first, providing leadership to those younger men who might not have caught the full intent of His words. Jesus/Yeshua did not want anyone to be hurt, even if the motive was to entrap Him.

Now, we proceed to the central point.

For centuries, we and our Christian forefathers have sat in church on Sundays and heard the stories of the Bible, particularly the stories of the New Testament. And nowhere in the New Testament are there more stories than in the first five books, of which the first four are the Gospels. Week after week, year after year, we listen to stories of Jesus and his confrontations with the Scribes, the Pharisees, and occasionally the Sadducees. (Jesus is recorded as doing much more than simply spar with Pharisees, but I am focusing my attention in this column on those many passages in the New Testament record).

We Christians, while being physically separated from the Jewish people in our churches, hear stories about all kinds of interactions between Jesus and the Jewish leadership of the First Century. And while it may not be stated this way from the pulpit, there is an underlying implication that we are left to draw in our own minds, that: if Jesus represents all that is good, then by contrast the Scribes and Pharisees of His day represent all that is bad.

Again, without it necessarily ever being said, we are left to fill the vacuum in our own minds, which, by extension, causes us to: attribute the attitudes and behavior of the Pharisees from 2,000 years ago, upon the Jews of today.

It is a giant elephant in the room, or in the pews, or in our own living room, or lurking in the shadows of our minds, whenever we happen to be reading the stories.

To this situation I have a number of comments to make.

No story has been penned in the annals of men,

These preconceived notions we have been taught, either inadvertently or overtly, build in us a stronghold that is ripe for the tearing down. To the very extent that one has been laden with stereotypes about the Jews, one is made ripened to have those stereotypes overthrown. And those first true relationships that are formed can become the sweetest ones of all.

I have been to Israel over fifty times and have met hundreds and hundreds of Jews who may all disagree with my belief of the Messiah, but who still treat me with kindness and respect. For sure, many Jews would and should feel uncomfortable to be around a person whose “Messiah” has been the name under which their own forefathers were persecuted and even murdered. They have every right to stay clear of me if they so desire. But, the point is that I simply don’t see the “stories of Jesus’ interactions in the New Testament” being replayed in Israel today. I’m not saying it can’t happen, but I am saying I’ve never personally seen it even once.

The Jews tell us that their perception of the reason that the Second Temple was destroyed was “the improper treatment of people”. They see that somehow the Jews of the first Century had lost sight of what it means to care for one another, and love one another. If that was the case, then the return of the Jews to the land, HAS TO BE proof, that this sin has been repented of, and rooted out of the people of Israel. So am I just “not seeing” that which is present in Israel?  Am I closing my eyes to the facts? I say: “No!” Indeed, the way that the Jewish community rallies around each other, is a sight to behold. While I didn’t expect this, I have had to admit that our “community” among Christians is not at the same level of caring for which the Jews have for each other. The nation who was exiled for not being brotherly among their own, is now a world leader in modelling what it means to be brotherly among their own. And that love is beginning to extend beyond the border of Israel as well, in the form of, for instance, IDF emergency disaster relief assistance, caring for Syrian fighters in Israeli hospitals, not to mention attempting to live side-by-side in peace with Arabs everywhere.

It has been pointed out that when it comes to criticism of the Jews in the New Testament, that such recorded criticism is always between fellow Jews. I am not aware of any record in the New Testament of a Gentile being in any way commended or encouraged to criticize the Jews. Instead we are encouraged to love and appreciate them, and to shun arrogance within us, as directed in Romans 11:18.

I believe that much of what we have seen in past centuries regarding the kind of interaction that HAS happened between Christians and Jews, is that of attempting to fix the Jews. What I am suggesting here is that some (not all) of that underlying desire to fix the Jews, comes from the negative perception of the Pharisees of the first Century that has been taught to us in our formative years. We have been partly trying to fix a stereotype that exists in our own minds.

One of the best sermons I ever heard at my church had as its summary: the attitude we should have in ourselves when relating to the world around us is:

Yes, the right way to read the stories of interaction between Jesus and the Pharisees, is to let them be a revealing of ourselves. Are there any attitudes in the hearts of any men in the first Century that are not present in our hearts today? Is there anything new under the sun? Of course not.

If we need to press the world into good versus bad, with Jesus being the good, then let’s be sure and put ourselves properly on the side of the “bad”.  The Bible says so:

Man’s deeds are corrupt and loathsome; no one does good. Psalm 14:1b (TIB)

And regarding Jesus being good, He is not silent on that topic either. Remember that time in which a rich young Jew came to Jesus and addressed him as “good teacher”.  He responded:

When it came to goodness, Jesus taught us to look up. In the world of Jewish-Christians relations, I’d have to say that…things indeed are looking up.

And with regard to Christians throwing stones at the Pharisees of the first Century or at the religious Jews of today, perhaps the words of Jesus can still be applied: