One of the minor prophets, Zechariah, makes a major-league promise in his eighth chapter when he quotes God declaring that all four major fast days of the Jewish people will be turned into joy, gladness and cheerful feast days, in the last days.

Now that 70 years have elapsed since the modern rebirth of the Nation of Israel, many Jews of Israel have begun to wonder if a transition from fast to festival might be appropriate for one or more of these fasts. The fast of Tisha B’Av (also known as the 9th of Av) is the second fast mentioned in the list above, the fast of the fifth month.

In fact, that very question “shall we continue to fast?” was asked by the returned exiles from Babylon soon after they had rebuilt the Temple, as recorded in Zechariah 7. Does anyone remember what was the day that they asked this question?

In the fourth year of King Darius, on the fourth day of the ninth month, Kislev, the word of Hashem came to Zecharya—when Beit El-sharezer and Regem-melech and his men sent to entreat the favor of Hashem, [and] to address this inquiry to the Kohanim of the House of Hashem and to the Neviim [prophets]: “Shall I weep and practice abstinence in the fifth month, as I have been doing all these years?” Zechariah 7:1-3 (TIB)

That was the question asked over 2,500 years ago. Now, 2,500 years later, it is rightly being asked again by the Jews.

This fast is a topic of great interest to Root Source, since it has everything to do with the activities we embarked upon this past summer on the 9th of Av. The fact that a remnant of Christians took up the activity of reading a many-page list of atrocities (get that latest list here), lamenting on that day, has caught the attention of a few Jews, not the least of whom is Rabbi Tuly Weisz. We will speak more about his views on this at a later date.

From Minor to Major

But today, I would like to take you in a completely different, yet pleasant, and perhaps unexpected direction. I would like to ask this very same question from the standpoint of music:

If the Nation of Israel were to transition its days from fasting to feasting, what would happen to its music?

Or perhaps even more generally stated:

This question came upon me, not out of the sky, but out of the air. One of the most interesting rabbis in Israel is Yitzchak Ginsburgh, who is a pillar in the Chabad movement and in Israel at large. His teachings are deep and wide, and he may touch on physics as easily as the inner workings of the human soul.

This I have known for years. What I did not know was that he is a musician!

Soon after it was published in late January 2018 an email reached me from Ginsburgh’s Gal Einai Institute, featuring a newly released piano melody from Ginsburgh. 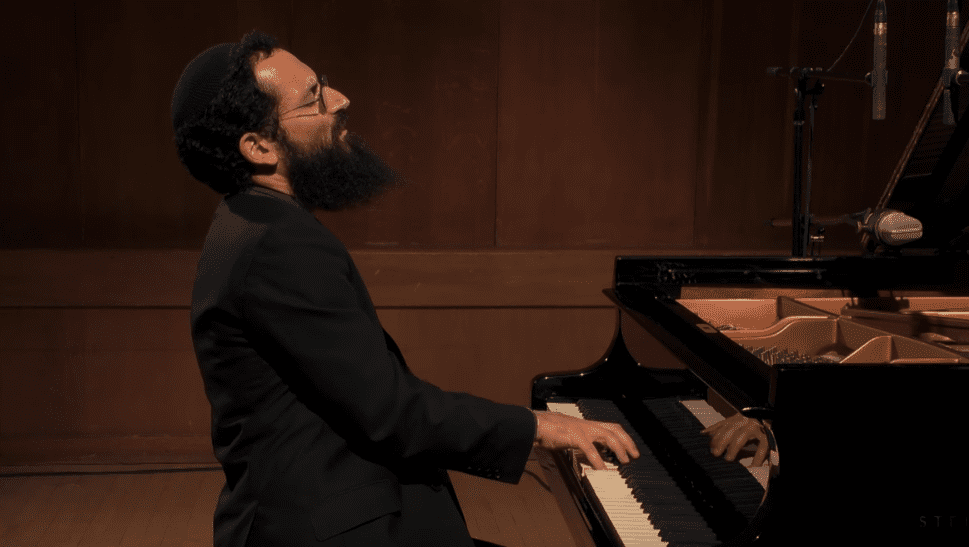 You can listen to it by clicking the link below:

It is primarily a minor melody that recalls for me — I don’t claim to be a musical expert — a feeling of Ashkenazi melodies of Eastern Europe. It is quite beautiful. But what captured my attention upon first hearing, was the sudden and surprising allusion to joy in the midst of the piece, where there is a shift from the minor chords to a brief sequence of major chords. But that transition is fleeting. Almost as quickly as it comes, it is gone, and we return to the minor key.

And then in the second half…the strongest and most noticeable departure to a major key occurs at 3:48 for 10 seconds, followed by 5:02 for 5 seconds.

Now while this piece is beautiful, it would not have inspired an entire column on its own.

But let us pick up the story 4 months later.

On May 31, 2018, a second piece was published on the same piano, by the same pianist, and by the same composer: Rabbi Ginsburgh. You can watch and listen to it by clicking the link below:

And this time, the composition was entirely different!  And just like any good movie description doesn’t describe the second half of the movie, neither will I describe this second piece of music.

That should be enough said for many of you. But not everyone likes my obscurity, so for those who need it I will tell you to be sure to listen to what happens in this second composition at the 2:23 minute mark!

Listen to both pieces in sequence.

Can you see them as two interconnected parables?

Can you see them as  two prophetic stories?

Not just as they stand in isolation from each other, but in the transition from one story to the other, they reveal what must happen in the days to come for the music of Israel, and for Israel itself.

And speaking of fasting to festivals, I find it quite appropriate that the first name of the composer of these two pieces is Yitzchak (Isaac) which was a name chosen not by man, but by God, and means of course: laughter.