Most of these columns are designed to offer some insight or observation about things that are happening at the intersection of Christian/Jewish relations. Today’s topic is a lot heavier on the observation than insight.

How should Christians think about national salvation? 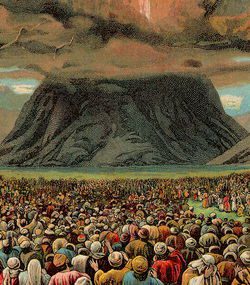 First, the Exodus story is the birth of a new nation. A large family enters Egypt and hundreds of years later, a nation named Israel — the Israelites — make their Exodus from it. Yes, it is true that national concepts do appear in the New Testament. Yet, I think I could argue that there is heavier practical teaching in the New Testament on building a heavenly kingdom than an earthly one. Even if you disagree on that, I think everyone can agree that to the extent an earthly kingdom is portrayed, it is not a kingdom that is separate from the concept of Israel, which is exactly one of the reasons why Replacement Theology was a “forbidden fruit” that was so tempting that we could not resist taking it from the tree and offering it to all our friends. Now this is not to say that the New Testament does not strongly develop the idea of “the nations”.  It does. But, much of the instruction in the New Testament was on how to bring a heavenly kingdom into an earthly one — in whatever nation in which one happened to reside.

Second, the newly formed nation of Israel had physical adversaries.  Israel had to defeat physical adversaries such as Pharaoh and his army, as well as the Amalekites, and many others along the way. The New Testament does not charge us to start our own new nations, but to try to live peaceably in the nation in which we find ourselves, if possible. We are told that our battle is not to wage war against flesh and blood, but to use spiritual tools to do battle in the heavenly realms against spiritual enemies (e.g. Ephesians 6). We are also taught to fight sin in our own lives, to overcome it, and to become ever more like God Himself.

Third, the nation of Israel was on a journey to a physical Israel. Their nation of Israel was on its way to a physical land that had already been given to them by God. The New Testament teaches clearly that we Gentiles can become spiritual sons of Abraham, that we can be grafted into the olive tree that is Israel, and that we can be brought into what Ephesians also refers to as the commonwealth of Israel. Yet, many Christians find their hearts being drawn to the land of Israel physically, wanting to live there physically. A few may achieve that, but most must be content to visit on tourist visas. This physical topic could take us into many different areas of thought, from the concept of sojourners (or ger), to the topic of the ten tribes, to the topic of today’s Israel immigration policy today, to the definition of a Jew. Some writers zestfully tackle these topics publicly and in print, while it seems other writers or ministries have made a decision to never discuss their views publicly. I don’t fit into either category, by the way. But, for the majority of Christians today, the land of promise is a place called Heaven.

Fourth, the nation of Israel was brought to Mount Sinai to enter covenant. Israel was asked by God in Sinai if they would be willing to enter into a national covenant with Him. According to scripture, the entire nation committed itself to obey those commandments. Today, those who believe that Jesus is the Messiah are sharply divided on what the Mosaic commandments mean for us. Numerous positions are taken. I suppose that they range from, on one extreme: a Christian must keep all the commandments (as is possible to keep) to be “saved”; and on the other extreme: the Old Testament and all its commandments (including the Ten Commandments) were made null and void by the resurrection of Christ. If you know of a more extreme position in either direction, please write it in the comments! Today, I would guess that the single most common position among all Christians worldwide is that Christians should keep the Ten Commandments, and to follow everything in the New Testament. The irony of this majority view is that the New Testament has over 1,000 unique commandments in it, many more than in the Torah!

So, these are four additional elements of the “salvation of Israel” that appear in the Exodus story, but are not embraced in the Christian idea of salvation.

First Response – Do No Harm

I consider myself to be a “learner” in all these topics. I do not have hard-and-fast conclusions about all of them. I have not found any follower of Yeshua yet who has views that fully answer all my questions in any of those four topics, much less all of them combined. The more certain a Christian is that they have “worked it all out”, the less comfortable I get.

But, what I do feel very strongly about is the need to “do no harm” in my process of being a learner.

For me that comes in the form of both a commandment A and a commandment B, which are my personal instructions that I believe I have heard from the Lord (and from scripture).

The evidence is overwhelming that the Israel of the here and now is a miracle of God. Gidon considers that Israel is a land: the land of Israel; a state: a Jewish political State that has a flag and law and borders etc; and a people, a Jewish people. That works for me. I therefore consider that my first commandment in the work I do regarding Israel, is to honor the ongoing work of God in these three definitions of Israel.

If I believe that God is at work in Israel, I must also believe that God is at work in the nations of the world as well. By nations I also mean the territories, the various nation states (Mexico, Canada etc) and all the ethnic people groups distributed around the world, and the spiritual work of God in those various nations through Christ. But I see my main job in the nations, as it relates to Israel, as standing against Replacement Theology, which has led to massive sin against the Jews. What that means practically, is that while I remain a learner on those four big topics above, I will not hesitate to “call out” and “stand against” anything that looks and feels like Replacement Theology within each of them. (I hope to write more on that another time.)

Because I know the USA better than other nations, I find it easiest to discuss it. But if your nation has a story that might be similar, I would be absolutely eager to hear it.

Was the United States built around national salvation as in Exodus?

On this topic I am also still thinking, still learning.  In such cases I try to think it through by trying to make the case for and the case against.

Perhaps some might find my “case against” being a problem of demographics of the country rather than a problem inserted into its founding. So maybe it was founded as a Christian nation, but it is simply struggling to maintain itself as such.

What I do see in the United States today, is a great struggle. I see the struggle as between (a) the belief in a one True God and living by His principles that are set out in the Bible, and (b) the belief that certain smart/successful people have progressed in their capability to “know the good” way we should go, and are asking us (if not demanding us) to follow them rather than God. This simple description is reminiscent a bit of the Tree of Life struggling with the Tree of Knowledge of Good and Evil.

As we have asked a number of times already in these columns: Is there anything new under the sun?

And as far as the struggle going on in the nations, I’d prefer to let God do the saving!