While the 9th of Av is the traditional day of Jewish fasting for the destruction of the First and Second temples, God has promised in Zechariah 8:19 that it, and the other three major fast days will all be turned into feast days. Av is the fifth month of the Hebrew calendar.

Although I have known her for years, I only recently learned that Christian leader Christine Darg, who lives in the UK, flies into Jerusalem every year to be present on the 9th of Av, in the hope of personally witnessing the moment the prophecy will be fulfilled that the fast day of the 9th of Av will one day become a feast day for the Jewish people.

In 2018, about dozen Christians leaders came together with Donna Jollay of Israel365 and Gidon Ariel of Root Source to express to Speaker of the Knesset Yuli Edelstein.

Two days later, I was on a phone call with Orthodox Jew Eliyahu Berkowitz of Breaking Israel News, being interviewed about the implications of that prior meeting with Speaker Yuli Edelstein. Eliyahu is known for his thousands of articles written on the topic of redemption and the coming of the Messianic Age. Eliyahu told me that he was not particularly interested in having Christians grovel in self-deprecation for the sins of our past that we are unable to fix, and asked about the mood of the meeting with Yuli. I responded saying:

“There seemed to be a lot of joy in that room.”

After further questioning and reflection he pronounced his opinion:

“I think that what you are doing here is creating a Christian 9th of Av. What do you think?”

“How should I know? We are just trying to put one foot in front of the other! I don’t think it is our place to pronounce such a thing.”

In the end Eliyahu did not include that comment in the article, but it certainly got me thinking.

Late in that summer day, I sat down outside to listen to a podcast replay of a sermon from Pastor Trey Graham, of Melissa Texas, who earlier that day had (amazingly) delivered a sermon to his church about the 9th of Av. 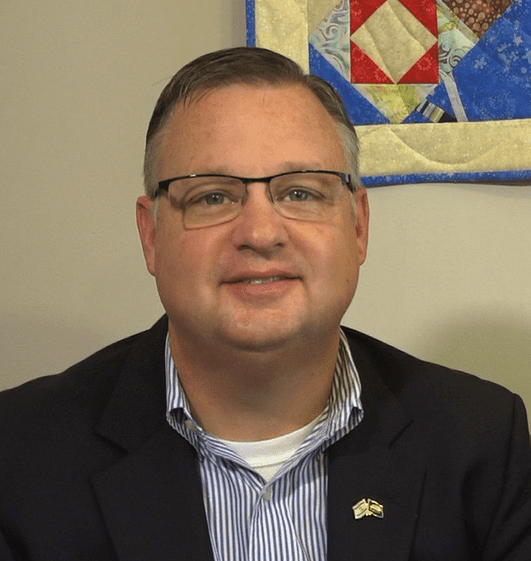 His sermon began with Kadesh Barnea and the spiritual warfare that must have been present to encourage the ten spies to give a bad report. But his sermon ended by reading two passages from Zechariah 8, that were going to rock my world. We will talk about the first passage in this article, and save the second passage for the next article.

Let’s set the stage for what Pastor Trey read.

The seventy-year Babylonian exile of the Jewish people had ended. During that period a fast in Babylon had been instituted on the 9th of Av to mourn the destruction of the First Temple. But now that the Temple was being rebuilt, men from the town of Bethel came to inquire of the priests about whether they should continue to fast and weep on the 9th of Av, as they had in the past? I agree that this was an excellent question! The Lord’s response to them in Zechariah 7:5 probably surprised them. He began with a rather harsh question, “was it actually for Me that you fasted?”

“Speak unto all the people of the land, and to the priests, saying, When ye fasted and mourned in the fifth and seventh month, even those seventy years, did ye at all fast unto me, even to me?” Zechariah 7:5 (KJV)

From this opening it would soon be clear that the answer was going to be “No! Do not stop fasting!” Then after further discourse the Lord declares that something much bigger and better is going to come in the future than what they were currently witnessing. The Lord would bring about a return to the land of Israel that would be much larger, and would come about with great salvation and blessing. The Lord then continued with the passage that the Pastor quoted on that Sunday, as show in the photo below. 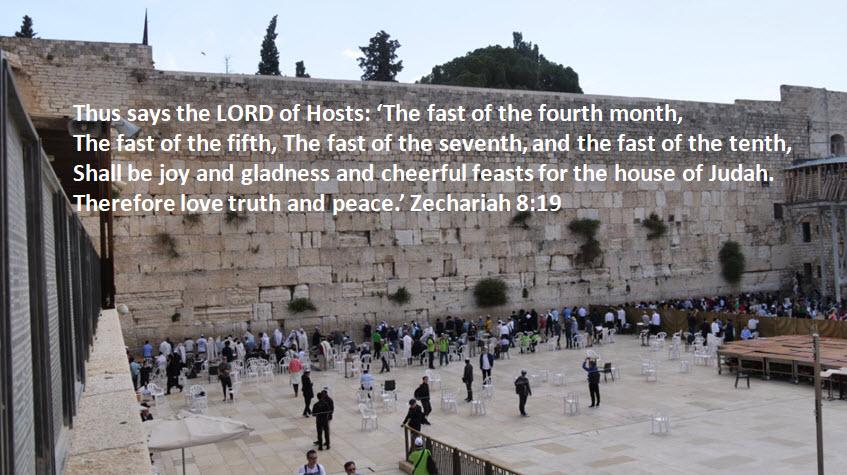 Western Wall with Zechariah 8:19 overlaid upon it. (Photo: Bob O’Dell)

Now we have one last person to bring into the story: Rabbi Tuly Weisz. 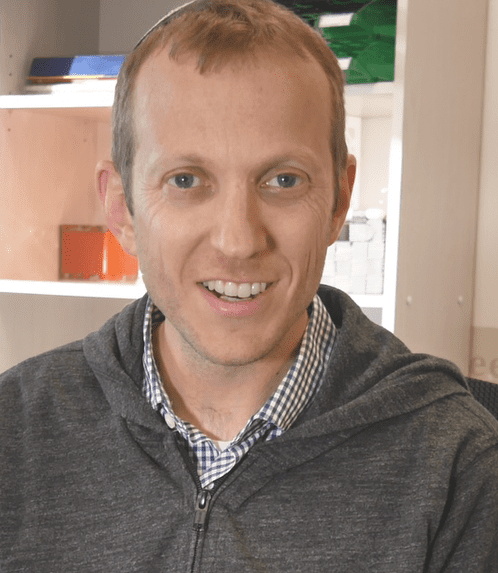 While I would not learn about this until weeks later in the Sukkot holidays, Rabbi Tuly Weisz of Israel 365 had been touched by the knowledge of the work we were doing. He delivered a talk to his own synagogue on the day before the 9th of Av. Later he recorded a talk for us, to explain his thinking, saying:

“This past Tisha B’Av I noticed that the fast of the 5th month is actually Av. What does it mean that these days shall become joy and gladness? Because there is an idea in Judaism that one day there will not be any holidays at all — they will be cancelled. Yet it seems that the prophet Zechariah is going out of his way to say that the fast days are not going to be cancelled — they will be transformed into days of feasts and festivals.

Why would the holidays, for instance Passover, be cancelled? We know it will be cancelled because in Jeremiah 16:14 it says:

Based on this, the Jewish belief is that there will not be a Passover; that because we will be so close to God, we will not need the holidays to direct our attention to God in that moment in time. The same is believed for Shavuot and a Sukkot. So then why does Zechariah declare the fast days will become feast days?

Here is what I believe. Each of the different fast days will eventually correspond to a different Jewish Holiday. I believe that it will be the holiday of Passover which will be replaced by the 9th of Av, which has inside of it the correcting [or redemption] of those tragic incidents in Jewish history.”

What I hear Rabbi Tuly saying here is that the miracle of the Feast of Passover and Unleavened Bread, that instituted the great Exodus to the Promised Land, can be seen as somewhat tarnished by the later, horrific destruction of the Temples and many exiles and Jewish expulsions. So when Jeremiah 16:14-15 is finally and completely fulfilled, then that greatest of all Exodus events, and its associated Passover, will itself be overshadowed, as proclaimed by God in Jeremiah, by the greatest of all Exodus events, and that this greatest of all celebrations will occur on the 9th of Av!

“The only thing that can bring about that redemption and transformation from fast to feast is through repentance. On the 9th of Av the Jewish people sit on the floor and we repent. We cry. We are broken. We try to get closer to God. We consider what led to the destruction of the Temple and how we can bring about the rebuilding of the Temple. It is a very internal process and we try to repent as much as we can.

But, I believe that because these fast days in Jewish history were all brought about by the enemies of the Jewish people, in some way, shape or form, then what will trigger the fast day to become the feast day? It will happen when not only do the Jewish people repent on the 9th of Av, but when non-Jewish people repent as well. Anybody who takes the Bible seriously needs to take the Jewish festivals seriously. And when the non-Jewish world starts to understand that these Biblical holidays are part of the Biblical story, and begins to take the biblical fast days seriously and to participate in the fast days and to repent on them, in that way God will bring about turning the fast days into feast days.

So to have non-Jews commemorating the 9th of Av for the first time in history — it has never happened before that more and more non-Jews are participating in the 9th of Av, owning their role, not a personal role but a spiritual role in the 9th of Av — I pray that this becomes the trigger to turn the fast into feast, and [to continue to advance] that spiritual revolution, the redemption of Israel described in Jeremiah, that is now happening.

I am so moved that there are non-Jewish people who are connecting with the 9th of Av and repenting on the 9th of Av. May God hear all of our prayers, and all of our repentance.”

Rabbi Tuly’s full teaching including diagrams of all the holidays can be seen in our blog post here.

How blessed we are to be living in days such as these. And with so much at stake, would it not be worthwhile to gather in Jerusalem in 2019 for the purpose of asking God’s forgiveness for the sins of the past, and the replacement theology that yet remains within the Church?

We will take up this question next time, as I finish telling my personal story of what happened on the 9th of Av in 2018.