Today we continue the mini-series on topics in which I don’t believe we (as Christians) are totally wrong, but for which our current view is just too small. 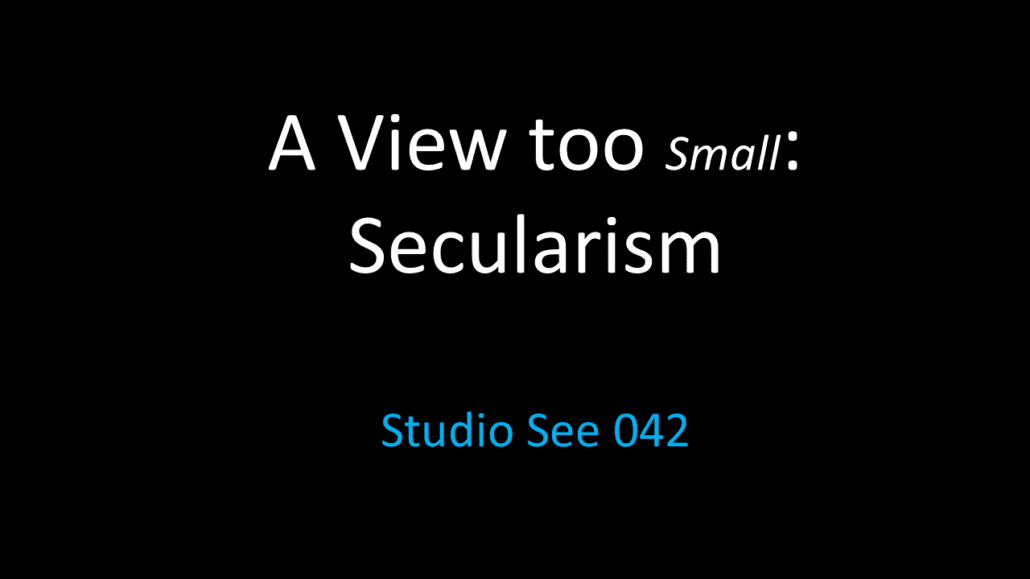 Secularism is defined by Merriam-Webster as “the indifference to, or exclusion of, religion and religious considerations.” I believe our view of secularism is too small because we think of it in terms of what it is protesting against — religion — rather than seeing it as a religion, an anti-religion if you will, which I will explain further down.

Amazingly enough, the seeds of secularism were introduced during the time period of the Inquisition. I cover this in detail in one of the devotions I contributed to the 40 Days of Repentance book that is going to be published soon by Root Source. There I present the case that the cruelty of the Inquisition was a driving factor in its rise.

Secularism questioned the existence of God, questioned the authority and legitimacy of the Bible, and envisioned a better world than one where the Church had massive power and control over the society.

More than 400 years later, secularism is still on the rise. Rabbi Berel Wein has called it “the greatest enemy of both Judaism and Christianity.”

What Does Secularism Want?

I have been watching what those who self-identify with the secular movement want to see happen in our society. Here in America, those desired changes seem to have been building up, like water behind a dam, and following the gay marriage ruling of the US Supreme Court in the summer of June 2015 have all been released into public debate.

The debate on the gay marriage issue, at least in the public arena, is no longer about whether it is right or wrong, but the extent to which those who stand with a biblical definition of marriage will be allowed to follow their conscience.

What I wish could still be debated publicly, is how the gay marriage ruling squares up with the law of Moses. The law of Moses was given to us by God. But alas, the debate about gay marriage simply won’t take place at Mount Sinai in the public sphere. It won’t be fought there. Instead, secularism wants to reframe every battle and fight it in a different location entirely: the Garden of Eden.

What do I mean by that?

I have observed that the issues that are being debated right now are so fundamental, that most if not all of them can be found in the first two chapters of Genesis! For instance, the battle over gay marriage is a battle that is framed at the conclusion of Genesis 2:

Hence a man leaves his father and mother and clings to his wife, so that they become one flesh. Genesis 2:24 (TIB)

Secularism is an anti-religion because its purpose is to destroy Judaism and Christianity. They will attack us in the beginning of our book. They want anyone who sits down to read God’s account of creation to be appalled at God.

But secularism is also a religion because it elevates man over God. Secularism is the religion of Self. And the ranks of secularism are joined by anyone who turns away from the Bible. That’s how you join their membership rolls!

Having taken ground regarding the definition of marriage, the religion of secularism convenes to discuss its next target. “Where can we strike against the Bible next?” asks a leader. “Stay away from Sinai!” someone shouts. “Stay away from Noah!” says another. “Go earlier still!” says a shrieking voice hidden from view in the shadows.

So let us look at just a few verses earlier.

And Hashem fashioned the rib that He had taken from the man into a woman; and He brought her to the man. Then the man said, “This one at last is bone of my bones and flesh of my flesh. This one shall be called Woman, for from man was she taken.” Genesis 2:22-23 (TIB)

Secularism will often align itself with various attacks that have been launched on masculinity; about God having designed a man to take the leading role, a first mover role in his connection to woman. It can also align itself with the attacks on women who have the desire to manage the affairs of the household, including the undervalued job of bringing up children.

But that target is not satisfying enough. Secularism moves its focus earlier still in the Garden of Eden.

Hashem took the man and placed him in the garden of Eden, to till it and tend it. Genesis 2:15 (TIB)

Secularism puts Self on the throne. A person’s career journey — their work — is not to be seen as “God placing” us into a role that benefits His will, but instead, secularism compels us to find a plan of our own making. And if it’s successful we will have ourselves to thank!

But there are additional targets to be had in Genesis chapter 1.

For instance, we have the attack on procreation:

Hashem blessed them and Hashem said to them, “Be fertile and increase, fill the earth and master it” Genesis 1:28a (TIB)

In secularism, God’s command to mankind to be fertile and increase is ignored. In secularism, Self is on the throne. Children have to be tolerated, but don’t have too many or they might interfere with your financial standard of living, or your career aspirations.

But more battle targets are found in Genesis 1. How about an attack on gender?

And Hashem created man in His image, in the image of Hashem He created him; male and female He created them. Genesis 1:27. (TIB)

The essence of secularism is Self. Self is on the throne. Do you self-identify as the opposite of your biological sex? Then you make the call. God’s decision in how He elected to create you is now irrelevant. The battle continues:

Hashem said, “Let the water below the sky be gathered into one area, that the dry land may appear.” And it was so. Hashem called the dry land Earth, and the gathering of waters He called Seas. And Hashem saw that this was good. Genesis 1:9-10 (TIB)

Secularism eliminates the possibility of taking the matters of “climate change” to God in prayer. God says that if we really want wisdom about complex issues we can ask Him. The Bible actually describes great environmental upheaval occurring before the Messiah arrives. But, what I take issue with is the idea that we can come together without God and take control of our planet and fix “climate change.” In fact, I smile when I hear secularists talking about the need to “save our planet.” That’s apparently what secularism considers “salvation.”

What is Secularism’s Ultimate Aim?

Where is secularism heading, if it can obtain everything else it wants? I suppose that its ultimate aim is to raise itself up against the knowledge of God completely — to ban God entirely from our nations.

In the beginning God created the heavens and the earth. Genesis 1:1 (NASB)

Secularism already rejects God. But I am afraid that ultimately secularism will never be satisfied until The People of the Book also reject Him. The first stage in that process is that you agree never to speak of Him, or exhibit Him, or follow Him, or model Him, or remind anyone of Him in any way, shape, or form. After that, it is not a very big leap that either you, or your children who come after you, will walk away from the Bible entirely and actually stop believing in God at all.

The Peoples of the Book Respond

The Judeo-Christian response to all this is pretty simple. We have two chapters of our own.

Happy is the man who has not followed the counsel of the wicked, or taken the path of sinners, or joined the company of the insolent; rather, the teaching of Hashem is his delight, and he studies that teaching day and night. He is like a tree planted beside streams of water, which yields its fruit in season, whose foliage never fades, and whatever it produces thrives. Not so the wicked; rather, they are like chaff that wind blows away. Therefore the wicked will not survive judgment, nor will sinners, in the assembly of the righteous. For Hashem cherishes the way of the righteous, but the way of the wicked is doomed. Psalm 1 (TIB)

Why do nations assemble, and peoples plot vain things; kings of the earth take their stand, and regents intrigue together against Hashem and against His anointed? … He who is enthroned in heaven laughs; Hashem mocks at them. Then He speaks to them in anger, terrifying them in His rage… Happy are all who take refuge in Him. Portions of Psalm 2 (TIB)

The full chapter tells the full story which talks about a king who will reside in Zion, a king for whom Christians and Jews eagerly await even now.