Today we continue the mini-series on topics in which I don’t believe we (as Christians) are totally wrong, but of which our current view is just too small. The topic today is life lived in the context of community. 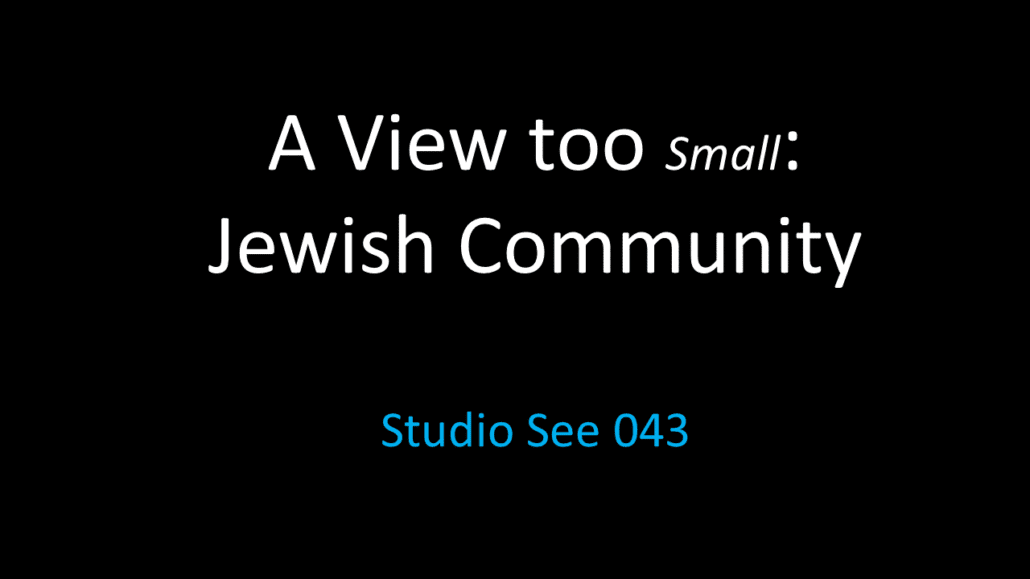 First, a disclaimer: this article is focused on Christians who live in western nations, such as the United States. I believe those of us in western culture can learn much from the Jewish view of community life.

Community life is a massive topic and one that touches us way down deep in our hearts, minds, and souls, even if we don’t realize it. Here are two examples:

First, of all the books written by the German Christian theologian Dietrich Bonhoeffer, his most cherished was the book that he wrote in 1938 called: Life Together. In it he described the early days of Christian men living together in seminary, seeking to pursue God daily.

Second, the final God-inspired blessing given by Balaam, whom King Balak had hired to curse the Jewish people while looking down upon them from a mountain, begins:

How fair are your tents, O Yaakov, Your dwellings, O Yisrael! Numbers 24:5 (TIB)

In his Root Source lessons in the series Pray Like a Jew, Gidon Ariel notes the fact that one of the very first prayers Jews pray in the morning quotes this non-Jew, Baalam, an outsider of Israel. Gidon also tells of one of the commentaries that says one of the reasons the tents were beautiful, was that every tent was positioned so that its entrance was not facing the entrance of any other tent! It is simultaneously a picture of both community and respect for privacy!

We think of the forty years in the desert as a lot of wandering, but the Jewish view is that this was the season of the closest knit community life in Israel’s history. Everyone in an emerging nation lived within a day’s walking distance of everyone else for forty years! And everyone is abiding by the same Torah, under the same leadership. Everyone knows how they fit in.

My Early Perspective on Christian Community

When I was twelve, our family left the Baptist church in order to participate in the charismatic renewal that was emerging in the 1970s. Because none of the churches in Clearwater, Florida were participating in that renewal, my parents started a Sunday morning meeting in our home. I was suddenly thrust into participation in a close Christian community, although there were very few kids coming in those early days. Over time, my parents and older brother and sister researched the New Testament scriptures for clues of what it meant to “do church” in the first century. For example: the New Testament never mentions more than one church in a city, even though today we tend to talk about multiple churches even on the same intersection! I was taught that there is one church per city.

A question began to form in my mind: If there was only one church, then why did I feel very connected to those Christians who met in our home, but not connected at all to the rest? Our family agreed that we should not be so isolated. So, many of the people who came to our house on Sunday morning, began to attend a second gathering in another location on Saturday night, which came to be known as the Saturday night meeting. Here, Christians of various “fellowships and churches” came together to participate in some of the charismatic renewal in a larger group. Those meetings included not just prayer and song, but teaching and fellowship as well. But while I have many fond memories of those evenings, the administration of that larger meeting by a diverse set of leaders eventually became discordant. The New Testament, we were taught, did not support the model of a single leader. I saw how difficult community life really was!

As I look back on those days today, I will have to admit that the Saturday night meeting experience lowered my expectations of what could be accomplished in a community setting. I settled for reduced expectations. When I moved to Austin, Texas in the 1980s, I would marry and we would join a non-denominational church that was somewhat charismatic. This church behaved much more like that original Baptist church that I originally grew up in, than the free-for-all meetings of the 1970s.

An Evolved Perspective on Christian Community

In 2012, something changed. In a time of personal prayer for our church, I sensed God telling me that He wanted a group of men to form in our church. While the name of our church, Hope Chapel, would suggest a name like “Men of Hope,” I sensed that this group must be called “Men of Faith.” Why faith? Because while our key issue was battling against passivity, faith is what motivates men to step into their calling. We invited men in the church to come together, to stand up against “passivity,” and grow up into spiritual leaders and prayer leaders in the church and in our homes. I was not the leader, I was one of four leaders. It was decided before the group even formed that a key practice would be that every decision was made by a consensus of the four leaders, meaning that any proposal made by one had to be agreed by all before it was acted upon. In addition, the group was under the authority of the pastoral staff, from whom we invited critique and correction. We met every other Saturday morning for four years. No two meetings were exactly the same, but every time the feedback among all was that our meetings were being guided by the Holy Spirit and the activities in a way that pleased God.

The Men of Faith group was fully established (by God) before I ever met Gidon Ariel, and even before I was interested in the Jewish Roots of our faith.

Then a page turned when I met Gidon.

An Introduction to the Jewish Perspective of Community

Through Gidon, I was introduced to Jewish community life. I thought we had a really great community of men put together in Men of Faith. And we did.

But, I began to see just how small my view of Christian community really was.

For starters, Gidon lives within walking distance of a synagogue, which every other family in his community attended. He knows every family. There are Whatsapp groups (a smartphone app invented in Israel that has spread worldwide) that allow Jews in Israel to do many creative things, such as work together to share carpools. But more than just coordination, people routinely borrow many things from each other as needed, including their cars.

Our men’s group was doing well to pray for two hours every other week. Gidon prays over an hour a day every day with the other men. Our prayers were more impromptu, though often derived right out of Scripture. Jewish prayers are standardized for each occasion and also built from scripture. Our participation was about 10% of the men who attended Hope Chapel. In Gidon’s community, being established as a religious community, I would venture that 90% of the men of the entire community participate daily, although it is always possible to pray in town on weekdays. Over time, I watched as men in our group began to step into more leadership in their homes, and some of the men got invited to join the official governing board of the church. But, I was also impressed by the way the Jewish men seem to be enjoying their prayer and are fully engaged in the spiritual life of their homes. In my community it was desired. In Gidon’s community it is the natural way things were done.

But in considering the differences, one day something occurred to me that raised my spirits greatly: most everything that God had led us to do in Men of Faith, was already happening in the Jewish community. For sure the Jews had a lot more practice than we did, and in Israel they had an entire culture to support this kind of close community life. We had none of that. But it showed that we were on the right track. It also showed that God must be blessing these Jewish practices.

One God over all.

What do Jews think about our Christian community? My experience is that the Jews are prone to believe the best about us. But there is one thing that WE DON’T DO that baffles them. Why do Christians in one part of the world not step in and do a whole lot more to rescue Christians in another part who are being persecuted, even slaughtered? Why don’t we care more for our own?

Better than any other group I know, Jews do come together in the face of tragedy. We can discern this by self-critique of Jews about their own people. A Jewish friend of mine, Yehudah Katz, recently wrote to Jews in his own community about their “coming together” not long after the murder of one of their community members by terrorists:

No one of us can say that we don’t have the vessels and capacity to get together. We have done it before and this week we have done it again. Why? Why? Why does it take tragedy to unite us?

My friend is appealing to his own community to be even more closely connected on a daily basis! He is not complaining about the level of connectedness during tragedy! This quote shows just how much further down the road the Jews are than we Christians, and perhaps every other group.

The topic of Jewish community life is a huge topic. We cannot hope to cover it well in a brief column like this one. I know I have only just scratched the surface.

I have no clear answers on how Christians can get to this level of community life.

I only ask that we recognize that the Jews have something, are doing something in the area of community life that is beyond us.