[Only seven articles are left in the Studio See series after this one.]

In my work in Israel and with Orthodox Jews in the last five years, none of my viewpoints has been changed more dramatically than with respect to Jewish forefathers.

Honor your father and your mother, that you may long endure on the land that Hashem your God is assigning to you. Exodus 20:12 (TIB)

I had always thought about this verse with respect to my own father and mother. But, as I worked with Gidon I began to see the Jewish people have a much larger view on this verse than I knew. Here are a few quotes that I began to pick up from Gidon and his friends:

“The sages tell us…”

Excuse me, but who else even uses that word anyway? But there it was being used over and over regarding the collective set of rabbis and teachers and elders and those that have said things that have stood the test of time.

Then there was the time Gidon said this to a group of Christians:

“I am privileged to be part of an unbroken chain of relationship to rabbis back to Moses.”

Here is what he meant. Orthodox Jews have the responsibility to be connected to a rabbi, that can help them answer questions about the finer details of following the halacha (or the way) of living. This rabbi is not necessarily the rabbi of the synagogue they attend. Each Jew has the freedom to choose any rabbi they want to be in relationship with, subject to that rabbi’s approval of course. And the rabbi they chose, had a rabbi with whom he was in relationship as well, and so on and so forth all the way back to Moses.

Excuse me, but who else talks like that? As we consider our Western independent mindset, who do you even know who says such things about their Christian heritage except perhaps the Pope? About the closest I ever heard of that sentiment was when Dr. John D. Garr introduced himself to a room full of Christians as:

That sounds like a man who knows and appreciates his forefathers! He has four generations of forefathers who are preachers. I cannot even imagine what it would be like to have the pedigree of Dr. John D. Garr. But the Jews have many more forefathers than that. 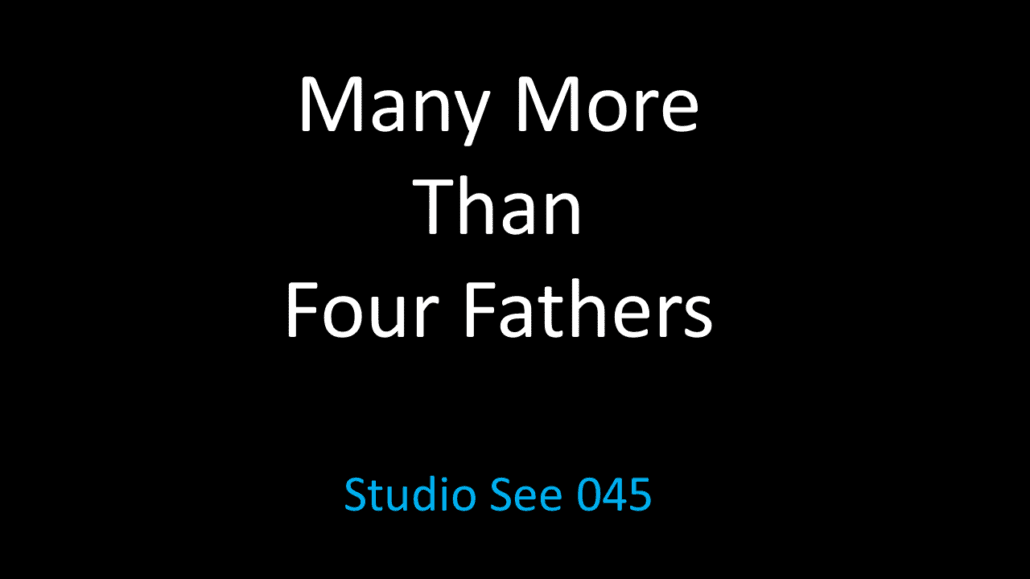 I remember also hearing Christian theologian Dr. Marvin Wilson talk about being a young man sitting in a classroom looking upon his Jewish professor (a rabbi) speak specifically of his forefather Moses. It brought home for Marvin that he was looking at a man who felt completely connected to his forefathers. All of a sudden the faith of the Jews became so real to Marvin, so personal, and so present in the room.

What is the impact of this reality for the Jewish people? Do they rest on the laurels of the accomplishments of others? Do they hold back from pushing on the boundaries of thought because it has already been done? Somehow I don’t think that trait comes up very often in the Jewish gene pool!

I wonder if it is just the opposite. Perhaps part of the reason why Jews have overwhelmed all other groups in innovation (such as in the statistics for winning The Nobel Prize for instance), is that there has been a lot of appreciation for those who came before. Perhaps they have heaped upon themselves a generational blessing.

Overall, it seems to me that what is happening is Jews being both progressive, and conservative at the same time.

A majority of Bible-believing Christians today are politically conservative. They appreciate the consistent values of the Bible and the fact that God does not change. When it comes to the founding of the United States, for instance, they appreciate the founding fathers of the nation, their faith, and their Judeo-Christian values. They recall to mind verses about the ancient paths being the right ones:

This is what the LORD says: “Stand at the crossroads and look; ask for the ancient paths, ask where the good way is, and walk in it, and you will find rest for your souls. Jeremiah 6:16 (NIV)

Such Christians often feel judged by those less conservative. Conservative Christians are called out of touch, unreasonable, and legalistic in the face of a changing national culture. Much hurt is spread between those who hold different views. Judgement abounds.

And yet, when it comes to the Jews, conservative Christians can fall prey to the same judgement! They can see religious Jews as being out of touch, unreasonable and legalistic in the face of the massive spread of Christian culture around the world. Those who are judged turn around and judge others who are even more conservative than they, preserving the value of forefathers from thousands of years ago rather than hundreds.

I believe the temptation to rush to judgement can only be broken in the context of relationship. It is SO much harder to criticize, compartmentalize, impugn and judge the motives of those with whom you have relationship. I am more empathetic now to those whose views are different from my own.

The verse about honoring your father and mother is the fifth of ten commandments.

Honor your father and your mother, that you may long endure on the land that Hashem your God is assigning to you. Exodus 20:12 (TIB)

In short, the Jewish view is that honoring one’s father and mother is akin to honoring God. Does that not affect our perspective just a little?

Honoring those who have gone before isn’t easy, especially when we know about their sins, limitations and failures. But perhaps a lot more honoring of our forefathers would honor God as well. It is not that we in the Christian world never do it, but our “honoring muscle” seems to be too weak, and needs to be flexed and strengthened.

And if we do so, may we and our children be blessed.