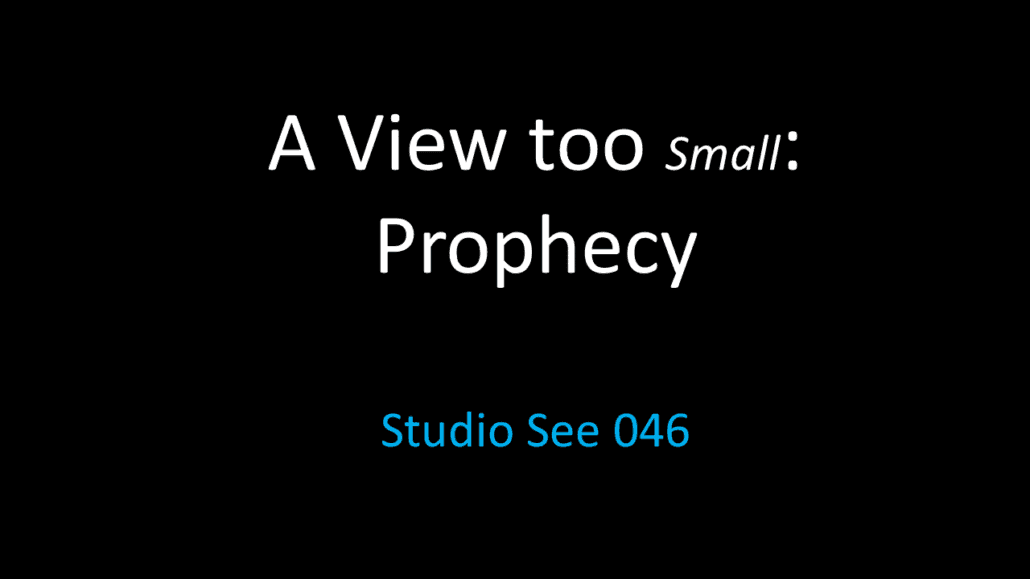 Before launching into what may be amiss, I want to begin by commending two aspects of End Times prophecy.

First, many pastors and preachers avoid talk of End Times prophecy like the plague (Zechariah and Revelation puns intended). So those who are willing to venture into this field deserve respect. In fact, the New Testament book of Revelation is the only book that explicitly promises a blessing just for reading it (Revelation 1:3). Perhaps the Apostle John knew something about how the church was likely to steer clear of this book.

A View Too Small

Nevertheless, despite these benefits, I am troubled by much of what I see today in the world of Christian End Times prophecy.

In one sense I speak not as an outsider, but an insider. Gidon Ariel and I have published two books on the subject: Israel FIRST! and Jubilee NOW! Yet in another sense I am truly an outsider, because my views would not please many leaders in that arena.

First, for a very long time I have been uncomfortable with the business model of the prophetic industry. It simply requires too much money to sustain itself. As was mentioned in the column about The Media’s Ten Commandments, it is human nature to try to grow the revenue of an organization and to extend its reach. The need for money precipitates self-interest, and self-interest forces sales plans and pledge drives. I simply don’t see that kind of prophetic activity appearing in scripture: not in the New Testament and not in the Old one either. The prophets in the Bible usually worked outside of normal life, maintained an extremely modest lifestyle, were usually outcasts, and never raised funds for their work. The Biblical model seems a whole lot safer to me, a whole lot less susceptible to bias based on self-interest.

Second, since prophetic products today are often sold, business principles come into play. People only spend money when they have a felt need for a product. Marketers (I was one for twenty-five years) know that future negative events generate a greater perceived need than future positive events. In other words, threats are more powerful than opportunities. In particular, fear is an extremely strong emotion that encourages people to spend money. All this has made the prophecy industry too negative for my taste. This is exactly the same criticism I made of the media in a previous article. The Biblical reality is that God’s kingdom is advancing and growing every day. God does not lose any ground. God does not lose any round. We do not limp into the future.

Third, while various prophetic predictions are made, I do not find leaders holding themselves publicly accountable to each other. While many “general prophetic words” cannot easily be graded for accuracy, they could at least be formally discerned and vetted by other leading Christians. Yet, those best-positioned to shepherd the industry are often unwilling, some because they are making a living from that very industry. We held ourselves fully accountable in our book Israel FIRST! We listed our predictions and proclaimed our hits and misses. The experience was simultaneously satisfying and humbling.

Fourth, I perceive that we spend a lot of time coming up with an End Times model and then fitting current events into that model. What model do I prefer, do you ask? I have a suspicion that none of these current models are big enough, grand enough, and magnificent enough to give God the freedom to wind up history in the way He deserves. I am reminded of the Sadducees that asked Jesus to fill in their “model” of what the resurrection (that Jesus believed in and they did not) might look like (Mark 2:24-27). In their question they offered him seven different options to choose from! Instead, Jesus completely reframed their argument and concluded: “God is the God of the living, not the dead.” Do we Christians think we can read such an interaction and not allow that interaction to apply to us? Are we who study End Times prophecy exempt from small thinking? Hardly.

Fifth, I perceive that many predictions are too short term in nature, as if they are designed to fit within the predictor’s life time. The Bible is a story of many generations, of a patient God who will not rest until He brings forth fullness in everything He cares about, but not by overriding man’s free will. Our New Testament quotes Jesus as saying “I am coming soon” but He has not returned in two thousand years. Is this some sneaky marketing tactic, as if it were designed to elicit urgent behavior? No! We are to walk forward, both holding in divine tension the Messiah’s imminent coming (without falling prey to escapism), yet working as if our torch must be passed along to multiple future generations before the Messiah comes.

Sixth and lastly, I perceive that many verses are already claimed to have been fulfilled and yet miss the point of an ever-greater fulfillment yet to come. What is greatly needed is the perspective of the Word of God as both living and enduring (1 Peter 1:23 and Isaiah 40:8). If we truly believe that the Bible is living, then no verse should ever be discarded when it is fulfilled, but it should rather be seen as having been strengthened, and remaining in play for another, even more glorious fulfillment. My friend Ray Montgomery has said of this idea, “Alas, so many divisions have been created on prophecy interpretation – when many times they have all been correct.”

A Prophecy Gathering I Dream About

How different today’s prophetic activity would look if we were first trying to understand and grow in our understanding of God’s ways and heart. If the word of God is living and enduring, then nothing in it is ever to be discarded and nothing in it ever dies. Imagine gathering to investigate how every truth spoken from the mouth of God, was always true, is true at this very moment, and will always be living and enduring in the future. If we were to feast in this way upon the magnificent beauty and power of God’s Word, our Christian prophetic activity, indeed our own prophets would be transformed.