One of the most beautiful and thought-provoking stories in the New Testament is that of the prodigal son. It is also one of the most taught. And yet, something hit me the other day that caught me off guard: an insight into this well-worn tale that I never considered before. 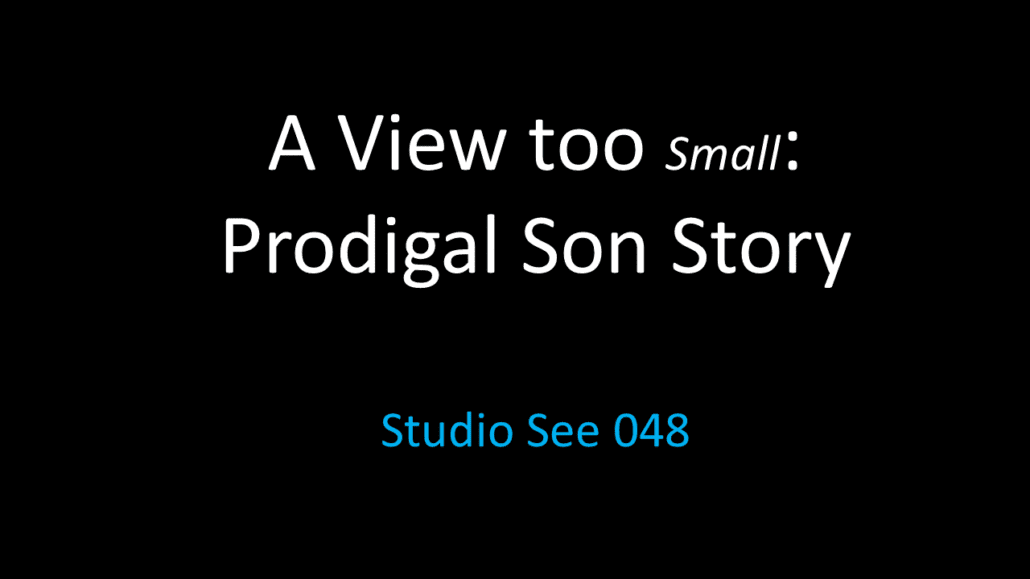 Jesus continued: “There was a man who had two sons. The younger one said to his father, ‘Father, give me my share of the estate.’ So he divided his property between them.

“Not long after that, the younger son got together all he had, set off for a distant country and there squandered his wealth in wild living. After he had spent everything, there was a severe famine in that whole country, and he began to be in need. So he went and hired himself out to a citizen of that country, who sent him to his fields to feed pigs. He longed to fill his stomach with the pods that the pigs were eating, but no one gave him anything.

“When he came to his senses, he said, ‘How many of my father’s hired servants have food to spare, and here I am starving to death! I will set out and go back to my father and say to him: Father, I have sinned against heaven and against you. I am no longer worthy to be called your son; make me like one of your hired servants.’ So he got up and went to his father.

“But while he was still a long way off, his father saw him and was filled with compassion for him; he ran to his son, threw his arms around him and kissed him.

“The son said to him, ‘Father, I have sinned against heaven and against you. I am no longer worthy to be called your son.’

“But the father said to his servants, ‘Quick! Bring the best robe and put it on him. Put a ring on his finger and sandals on his feet. Bring the fattened calf and kill it. Let’s have a feast and celebrate. For this son of mine was dead and is alive again; he was lost and is found.’ So they began to celebrate.

“Meanwhile, the older son was in the field. When he came near the house, he heard music and dancing. So he called one of the servants and asked him what was going on. ‘Your brother has come,’ he replied, ‘and your father has killed the fattened calf because he has him back safe and sound.’

“The older brother became angry and refused to go in. So his father went out and pleaded with him. But he answered his father, ‘Look! All these years I’ve been slaving for you and never disobeyed your orders. Yet you never gave me even a young goat so I could celebrate with my friends. But when this son of yours who has squandered your property with prostitutes comes home, you kill the fattened calf for him!’

“ ‘My son,’ the father said, ‘you are always with me, and everything I have is yours. But we had to celebrate and be glad, because this brother of yours was dead and is alive again; he was lost and is found.’ ”

The way this story is typically taught is to reveal the love of God the Father, embodied in the father of the story, towards those who wander off or squander time, money, and their life’s purpose in the pursuit of the pleasures of this world. The picture of a father that saw him a long way off, and did not wait for the son to reach him, but instead ran to the son, is a compelling image. I have personally witnessed this story soften hearts of people who are far from the love of God, or at least feel like they are.

One of the most interesting comments I ever heard about this story, told in the traditional manner, was by an unnamed preacher who once said:

In that distant country, the prodigal son lost everything he owned

his memories of home.

Indeed it is hard to bring a new thought on such a well-worn story, but that preacher did. Thanks to Arthur Burk for remembering and repeating that interesting thought.

Now let’s switch gears and look at the story differently.

Those people involved in Hebrew Roots or Jewish Roots ministries, Messianic congregations, and pro-Israel Christian churches might consider that this story can also be applied to the relationship between Christians and Jews. But in that case, who is the younger brother? I could also ask that question with a stronger emphasis: “Who gets to be the younger brother?” You see, one of the inconvenient aspects of this story is that the older brother doesn’t look very good in this story, does he? Yes, the older brother is faithful to his father, not squandering his possessions like the younger son, but he refuses to join in the celebrations, and is clearly upset about the sudden celebration underway for his brother!

As I have considered how this story is applied to the relationship between Christians and Jews, the thing I have often noticed is that:

Everyone wants to be the younger brother!

Indeed, I’m ashamed to say it, but in this context, we who do care about the Jewish roots of our faith tend to see ourselves as the younger brother “coming back from the pagan influences in Christianity,” or if you will, “coming back to an appreciation of the Torah,” and relishing the celebration of the feasts, the renewed intimacy with God, in the form of the Father, or through Yeshua as Messiah. But then are we not relegating our Jewish colleagues to the role of the older brother, who not very coincidentally reminds us of some of the Pharisees? To sharpen the point even further, when considering the rejoining of the two sticks of Ephraim and Judah in Ezekiel 37, cannot Christians rightly claim that the brother Ephraim is younger than Judah? Can they not rightly claim that the northern kingdom of Israel wandered away from their Jewish roots first, just as in the story?

About this desire to be the younger brother, I have several strongly-held points to make.

[NOTE: For any Orthodox Jewish readers of this column I would hasten to point out two things about Dean’s story. First, please note that “coming home” can mean many things, including returning to the land of Israel! Second, I do not see this story as a teaching moment for all Jews, but rather a teaching moment for Christians who have grown up with Dean’s prior outlook: namely that God is finished with the Jews. As further evidence of this, later on in that same video Dean speaks of how his experience in heaven taught him that the culture of heaven is actually Jewish! Dean then states that he began to seek out and learn about Jewish culture following that experience.]

What Then was New?

Everything I have just written above, I have known, and have been contemplating for at least a few years.

But I began this column by saying that something caught me off guard. Yes, I just saw something in this story that I had never seen! Are you ready for it?

Neither of the two men in the story felt as if they had a brother!

Yet, through this story, the father reveals that not only has each of his sons misjudged the heart of their father, but the distressed father tries to awaken in at least one of them his desire that the brothers begin to act like the brothers they truly are.

The story concludes without answer.

The purpose of this column series is exactly that. To encourage us as Christians to think differently about our relationship with our brothers, the Jews. It is well past noon, and while the sun still shines, the brightness of the day is beginning to wane. The day of pretending that we Christians can perfect our relationship with God the Father by playing in our sandbox alone, as if we are God’s only sons — that day is darkening as the sun sinks minute-by-minute towards the Western horizon.

We need to wake up and realize that there is a celebration going on in the land of Israel. The Father is rejoicing, and it’s time to accept that a party has been thrown for somebody who is very different from us.

We are going to have to learn all over again how to interact respectfully. Gidon often says to groups, “I learned in kindergarten to play nice with the other children.” Yes, I think a kindergarten level of friendship is a great place to begin.

And to the extent that Jesus’ statement to Dean Braxton applies to the Jews, how wonderful it is, how surprising it is, that God puts it on the heart of some of the sons of Israel, like Gidon Ariel, to be willing to open the door to that ongoing celebration in Israel, and invite us in.

Gidon makes it easy for us. We don’t even have to knock at his door. He knocks at ours.

Does that remind you of anyone?

P.S. We have only four more columns to go! I have four final chances to inspire and encourage us to think bigger, wider and deeper than we ever have about the purposes of God in Jewish and Christian relations. I’m sure there are better writers out there, better thinkers who could reveal these things and many more to you. Yet, I’m grateful that a few of you are willing to hang around and dance with that person who — happens to just be standing nearby.