If you grew up in Christian circles, you probably never heard the wonderful love story in Genesis about Joseph and Asenath. I only discovered it once I started reading the Torah along with the Jewish commentaries.

The story we tell herein has nothing to do with the apocryphal work Joseph and Aseneth, written by Christians perhaps as late as the 6th Century. Rather we go directly to the Torah and then weave our way back into the aspects of that story that are filled in by the Jewish Midrash.

We begin our story by reasoning from the text, using the sequence and style put forward in a video I recently discovered which had been published by El Shaddai ministries, featuring Orthodox Jewish speaker David Nekrutman (see Note 1). By the way, we will be publishing our own interview with David later this year. But in this article I will summarize David’s main points as I introduce you to that great Biblical love story you’ve probably never heard! 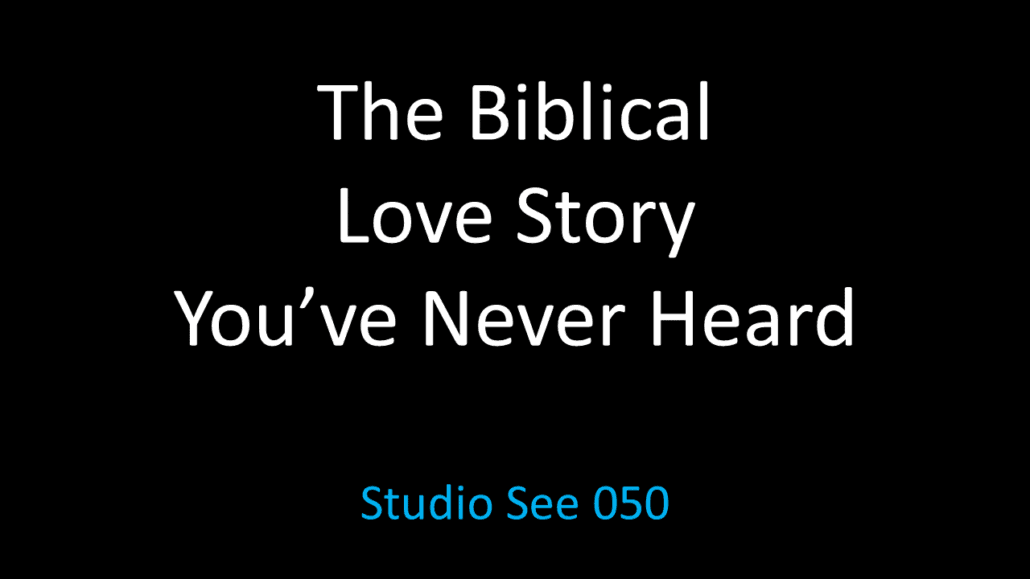 The Problem in This Story

David Nekrutman says that the purpose of the Midrash, or Drash as he calls it, is to try to answer the questions that we should have asked when we read the text.

Not one, not two, but three times does the Torah explicitly tell us that Joseph married “Asenath, the daughter of Potiphera, the priest of On.” Let us read all three:

Pharoah then gave Yosef the name Zaphenath-paneah; and he gave him for a wife Asenath daughter of Poti-phera, priest of On. Genesis 41:45 (TIB)

Before the years of famine came, Yosef became the father of two sons, whom Asenath daughter of Poti-phera, priest of On, bore to him. Genesis 41:50 (TIB)

To Yosef were born in the land of Egypt Menashe and Efraim, whom Asenath daughter of Poti-phera priest of On bore to him. Genesis 46:20 (TIB)

Why is every mention of Asenath in the entire Bible also accompanied by the declaration that she was “daughter of Potiphera, priest of On”? For a Bible in which nothing is without purpose, this emphasis is quite strange, is it not?

More than that, the very idea that Joseph would have married a woman who was a daughter of the Egyptian priesthood — that routinely practiced divination and sorcery — is bothersome as well. Imagine what that might do to Joseph’s future family heritage and bloodlines, to marry such a woman? Why then three explicit mentions?

Another question, a potentially much more Jewish-centric question that David Nekrutman poses, is even more striking. David asks, why did Joseph voluntarily disobey his family heritage and “marry outside of the family”? David in his video reveals the pattern of three other verses in Genesis that show how serious an offense it would be for Joseph to do so! Abraham made Eliezer swear to an oath:

But you will go to my country and to my relatives, and take a wife for my son Isaac. Genesis 24:3 (NASB)

And Isaac charged Jacob to do the same:

And in the case of Esau we see how much his choice affected both Isaac and Rebekah:

David Nekrutman mentions here how “brought grief” (morat haruach in Hebrew) can be translated as “brought bitterness to their spirit.” But even more so! David says this act, as rendered in the Hebrew, was nothing less than “spiritual rebellion.” Therefore, Jews read these passages and ask themselves, “How could righteous Joseph do such a thing?”

And if Joseph’s decision to marry Asenath was in fact unrighteous, then the sons issuing from that union should be negative as well. How then can Jacob bless Joseph’s sons with such fervor and intensity and prophesy that all Israel will pronounce the blessing upon their sons by which he blesses them? (Gen. 48:20). Furthermore, Jacob then adopted Joseph’s sons as his own, and gave Joseph a double portion of land in Israel!

So we have three verses that explicitly call out Asenath as a daughter of a priest of Egypt, and then three verses that say that if Joseph married such a woman, then he would be breaking the commandment of his fathers and would be acting in spiritual rebellion!

How do we resolve it?

Could it be possible that Asenath renounced her allegiance to the gods of Egypt and took on the faith of Joseph? This would go a long way to resolving the problem, would it not?

One verse we read above actually makes such an inference in Jewish interpretation.

Before the years of famine came, Yosef became the father of two sons, whom Asenath daughter of Poti-phera, priest of On, bore TO HIM. Genesis 41:50 (TIB, emphasis mine)

Notice the fact that the sons were born TO HIM! And here it is again:

To Yosef were born in the land of Egypt Menashe and Efraim, whom Asenath daughter of Poti-phera priest of On bore TO HIM. Genesis 46:20 (TIB, emphasis mine)

Jewish interpretation states that these verses imply that the two sons were born TO JOSEPH’S FAITH.

This is as far as we can get with the verses themselves.

But the Midrash offers tantalizing possibilities, each of which allows us to step into what could have been a monumental love story that we never heard.

First, what if Potiphera (the priest) was the same person as Potiphar, to whom Joseph was sold into slavery! This is exactly what the Midrash says!

This idea immediately opens a window into a long-running love story between Joseph and Asenath! They had known each other for years! Consider the possibility of the story of a woman, a daughter of Potiphar, who had been admiring the slave Joseph for years. She, probably younger than he was, had admired him at first for his wonderful physical attributes, and then later as a competent manager of all of Potiphar’s affairs, even more competent than her father! She must have learned something of his faith and his God, even in those early days. Later, as a growing young girl perhaps nearing womanhood herself, she must have watched with horror as her own mother took it on herself to seduce Joseph. She knew it wasn’t true — that her heart throb would never have turned against everything he believed in and been entrapped into an illicit affair with her mother. She knew it must not be true! With Joseph’s life in peril, she pleaded with her father not to have Joseph killed, the standard punishment for “rape by a slave.” Suddenly we see mercy in the idea that Joseph was simply thrown in prison, and not killed!

Asenath mourned and ached for years as she grew up into a beautiful woman herself, and watched the beloved slave Joseph hemmed in by prison with no escape possible. It seemed hopeless. Until, when she had all but given up hope, and all but agreed to her father’s demands for her to marry someone else, Pharaoh had a dream. When Joseph was raised to power, it was Pharaoh who asked Joseph “who do you want to marry?” That Joseph would be allowed to marry the daughter of Potiphar’s wife showed the world, finally, how righteous he really was all along. Potiphar’s acceptance was rewarded. He was quickly promoted to be the Chief of the priests of On, with Joseph’s blessing. The marriage was now a marriage of great rank and stature. Everyone got something.

But, wait! There is more!

The Midrash offers an even more tantalizing addition to the story that nobody sees coming. It is the kind of secret that is revealed only towards the end of a great story. A piece of information that changes the entire complexion and purpose and meaning of the story.

What if Asenath was not actually the daughter of Potiphar’s wife?

What if instead, Asenath was actually the daughter of Dinah, the daughter of Jacob, about which we know almost nothing in scripture! What if Asenath was birthed because of the rape of Dinah by Shechem, the son of a Canaanite prince? Was if Asenath’s story was complicated and she found herself sold into slavery, eventually in the household of Potiphar?

Was it possible that Asenath and Joseph were both slaves, both from the household of Jacob in the first place? Did Joseph essentially marry his niece — which was allowed in past practice? If this is the case, the story takes on another amazing dimension because not only did Asenath get married, she was officially adopted by Potiphar as his own daughter! If that is so, she was both officially Egyptian, and at the same time ethnically Hebrew! In this story, everything is preserved! The lineage of Dinah is redeemed! Dinah is the grandmother of Menashe and Ephraim! And Joseph has in Asenath a soul-mate in whom he can truly confide, someone who would never reject him for his Hebrew heritage, because she is a Hebrew herself!

Do you not think that a beautiful love story could be written from this Jewish perspective? A woman who was reviled for her heritage, can now be celebrated for her fidelity, her steadfastness, her faith and hope when the man she loved suffered for 12 years for a crime he didn’t commit. She is eventually adopted and raised to prominence! This is not just a “rags to riches story,” this is a “rags-rags to riches-riches story” that is full of faith and hope in the redemptive God of Israel.

As David Nekrutman says, “I can’t prove this is what happened, but I can tell you that this story has been passed down through the ages within the collective consciousness of the Jewish people for over 2,000 years.”

These are the kind of “jewels” that are available to us as Christians, when we humble ourselves a bit, and are willing to learn from the Jews who work hard to not only resolve the tension in verses, but to look for redemption in them as well. Three verses say one thing. Three verses say the opposite. How can these two worlds collide and both be true all at once?

Yes, Joseph and Asenath is a great love story, a strange love story, but it is a story no less great and no less strange than the great story we are all privileged to embark upon together as we learn to lovingly interact as Christians and Jews.