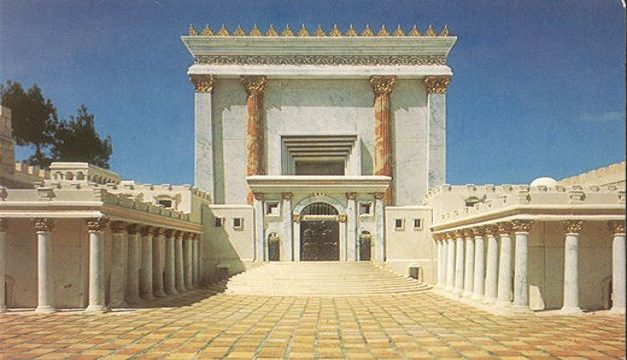 Abigail keeps on sending in questions! Here’s her latest (the answer is in between):

My husband, Dave, and I are confused about the number of temples, so far. We are looking at sites, but they are confusing. Shlomo’s is the first.

Then a second temple is built during Zerubabel’s time?

Yes, Ezra and Nehemiah. The return of the Babylonian Exile.

Then it says Herod expanded and rebuilt the temple on top of Zerubabel’s.

Yes, quite a while afterwards (about 350 years)

In top of implies destruction of the one to build another. I understand expansion and renovating, but to “build on top of”?

I am not sure what you are quoting, but that phrase doesn’t bother me. On top of can mean in place of. And yes, that second one was “destroyed” to make way for Herod’s. But it was done respectfully, to expand its splendor.

So, was Herod’s temple really the second temple? Or was it actually a third?

I have never heard anyone consider it the third. It was a renovation of the second.
But you have a point, and that idea might be usable in giving new meaning to some verses or teachings.
Whichever number it is, let’s pray that the next and last Temple be built speedily in our days!