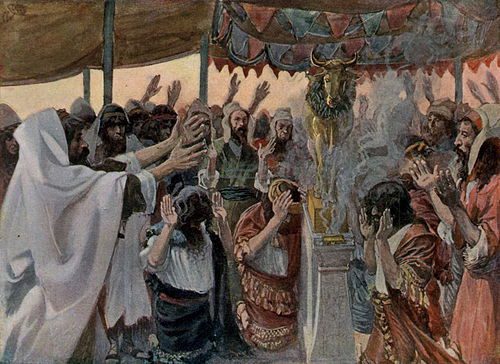 In this Shabbat’s weekly Torah portion Ki Tisa Exodus 30:11 – 34:35, contains the final instructions for building the Tabernacle. It also relates the events of the Sin of the Golden Calf. Following the sin, Moses pleads with God to maintain His relationship with the Children of Israel as it had been until that point. God commands Moses to carve a new set of tablets and He reiterated highlights of His law to the people. At the end of the portion, Moses finally descends from Mount Sinai, his face aglow with holiness.

Topic 1: The Half-Shekel and Finishing Touches
Our portion opens with God’s instructions on how to take a census. Rather than count the people straight up, He tells Moses that any time the number of people in the nation is needed, he should collect half a shekel (a biblical unit of weight, the inspiration for today’s Israeli currency) from each individual. The… Read More »

Topic 2: Commissioned to Construct the Tabernacle
God appoints Bezalel, grandson of Hur (who in turn is the nephew of Aaron and Moses and whom Moses appointed to take his place alongside Aaron when he went up Mount Sinai) to oversee the actual Tabernacle construction, in accordance with everything God laid out for Moses. He partners Bezalel with Oholiab of the tribe… Read More »

Topic 3: The Sin of the Golden Calf
This section begins with God giving Moses the two tablets of stone upon which He has written with His own hand. After an extended break, the narrative returns to the people, awaiting Moses at the base of the mountain. They notice that Moses is late in returning, and they turn to his brother Aaron, asking… Read More »

Topic 4: Moses Fights for the People
Although God forgives the nation, He tells Moses from now on, they will be led by an angel, lest God consume the people on the way. The people are devastated by the news, and remove their ornaments in mourning. Moses appeals to God to change His mind and continue to be a presence among the… Read More »

Topic 5: The Renewed Covenant
God tells Moses to carve two more tablets of stone like the ones he broke and return to the summit of Mount Sinai. Once there, God reveals to him His thirteen attributes of mercy. Appealing to that mercy, Moses again asks God to promise that He will remain amidst the people. God says He is… Read More »