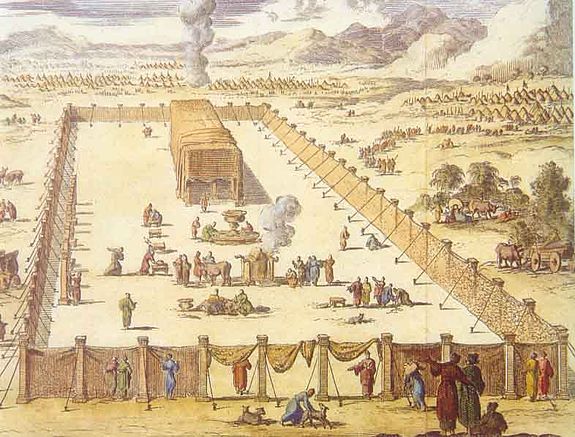 In this Shabbat’s weekly Torah portion Terumah Exodus 25:1-27:19, deals with the plans for the construction of the Tabernacle, God’s portable Temple in the desert. The Tabernacle will become the focus of most of the rest of the book of Exodus. It was constructed in the second year after the Exodus and remained in use even after the people entered the Holy Land. It was destroyed during the time of Eli the Priest, not long before King Saul came to the throne.

The portion opens with God asking Moses to collect donations from the Children of Israel to build the Tabernacle. Particularly, He asks that those who are generous of heart give what they are moved to donate. From the various riches which the Israelites took with them out of Egypt, they built a house of worship for God.

As God tells Moses in the beginning of this portion, “Build Me a Sanctuary and I shall dwell in their midst.” The Israel Bible points out the significance of this verse: the Tabernacle is not a physical home for God, but a tool through which God dwells among the people themselves, enabling a relationship between them.

Topic 1: Holy Vessels: The Ark, Table and Lamp
The portion begins with a call for contributions to the building effort. God gives a specific list of materials needed for His Tabernacle. He then goes on to describe three of the primary vessels which will be set up inside the Tabernacle: the Ark of the Covenant, the Table of the Show Bread and the… Read More »

Topic 2: The Tabernacle
The Tabernacle building itself is to be constructed out of several parts. Its walls are to consist of planks with tabs on each end. The tabs fit into silver sockets which hold every pair of adjacent planks together. Three bars, top, bottom and center, also secure the planks of each wall to each other. … Read More »

Topic 3: The Courtyard and its Altar
Moses is next instructed in building the Altar which is to sit in the courtyard of the Tabernacle. The Altar is to be a hollow box built of wood and covered in copper. Its utensils, too, should be copper. It is to have four raised corners, or horns, a base and a meshwork trim around… Read More »

Topic 4: Haftarah – Truman and the Non-Jewish Kings Who Helped Build the Beit Hamikdash
Just a few months after leaving the White House in 1953, President Harry Truman spoke to a Jewish group in New York. The president was introduced by Eddie Jacobson, his old friend and business partner, as “the man who helped create the State of Israel.” “What do you mean ‘help create’?” asked Truman, “I am… Read More »