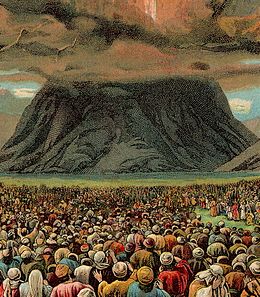 In this Shabbat’s weekly Torah portion Yitro Exodus 18:1-20:23, tells of a visit from Moses’s father-in-law, the eponymous Jethro, and of the Revelation at Sinai. It marks a turning point in the narrative, as from this point forward, more of the text is spent on expounding the law than telling the story.

Topic 1: Jethro’s Visit
Jethro, Moses’s father-in-law, hears the news of the Israelites’ exodus from Egypt, and decides it is time to reunite his son-in-law with his family, whom he had evidently sent away. Overjoyed, Moses and Jethro spend the evening catching up, with Moses filling his father-in-law in on the details of God’s miraculous intervention. Jethro brings sacrifices… Read More »

Topic 2: Preparing to Receive the Torah
The Israelites travel from Rephidim to the Sinai Desert, where they encamp opposite the mountain. God tells Moses to remind the people of all He has done for them thus far. He tells them if they hearken to His commands, they will be most precious to Him: a kingdom of priests and a holy nation.… Read More »

Topic 3: God Speaks
God begins His powerful communication with the Children of Israel by outlining ten essential instructions, known colloquially as the Ten Commandments, that, according to Jewish tradition, encompass all the concepts of the 613 Biblical commands. God commands the people to accept His authority, not to believe in any other godly powers, not to take… Read More »

Topic 4: Haftarah – The Home of Ancient Prophecy and Modern Literacy
A new book is published nearly every hour in the Jewish State, according to data from the National Library of Israel. 8,537 new works were published in 2015 including 7,843 print books and hundreds of audiobooks and eBooks. For such a small country, and when compared to other nations, these numbers are staggering and attest… Read More »