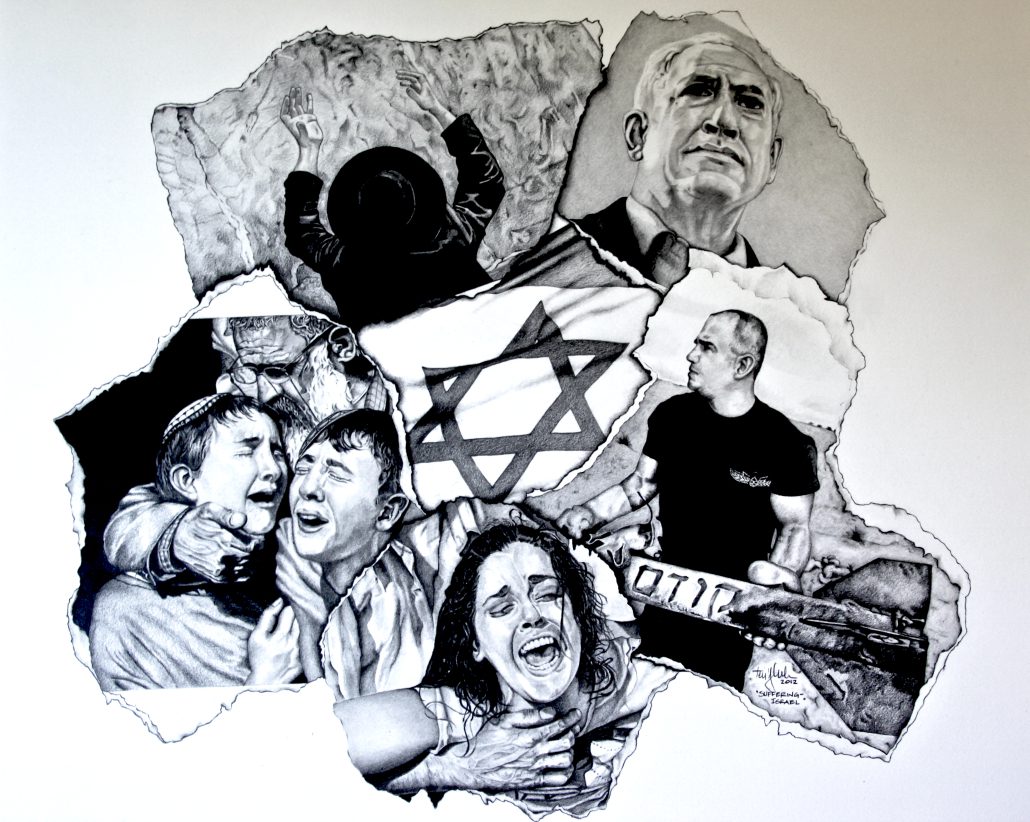 Tj is one of Root Source’s most active students. She shared this emotional painting she created and we asked her to write about it.


The Story Behind the Picture

I drew this picture, “Suffering-Israel” in 2012 because I was affected by the terrorist bombings and attacks against Israel. I wanted to draw something as a way to make a statement in support of Israel and as a way to depict how heavy my heart was for what was happening to them, and what seems to always happen to the Jews in general.
I combed through newspaper articles and pictures online and found those that spoke to me. The Orthodox Jewish man praying at The Western Wall was included because of how much that scene affected me on my first visit to Jerusalem. I also wanted to include Bibi Netanyahu. The other people drew depicted the deep sadness and horror I felt during this time.
This picture is screaming to the world to wake up to what is happening to Israel and to her people. Will the world to open its eyes?!  These are innocent human beings and they are under constant attack, just because they are Jewish!

I wanted to share this picture with Rabbi Ken Spiro who is a cherished teacher for Root Source, because he was doing a series on “A Nation that dwells alone“.
Before I even listened to any of the series, I was thinking that I wanted him to know that Israel is not alone. I wanted to express to him that there are many of us out here, among the nations, who love and support Israel, who pray for her and worry about her and defend her with our words. I wanted him to know that I love Israel and that many, many of us do. I just want Israel to know that, and that I am there for them, always!
As for Rabbi Spiro, I love his classes and I love his teaching style! I have learned so much from him and I’m very grateful for him taking the time to teach us about Jewish History, past and present. I look forward to his classes and they impact my life. I pray to be able to “one day” come to Israel and to meet him (as well as other Root Source teachers) and take a tour with him. That is a desire of my heart.
Subscribe
Login
7 Comments
Oldest
Newest Most Voted
Inline Feedbacks
View all comments