Was the recent lunar eclipse on Purim a Blood Moon? No.

Did we just complete a “Pentrad” rather than a “Tetrad”? No.

People have asked me about the YouTube video talking about a fifth Blood Moon during Purim. But, this is simply not the case. A Blood Moon for starters has to be a TOTAL lunar eclipse.

Not only was the lunar eclipse last Wednesday not TOTAL, it was not even PARTIAL. It was something so slight, called a PENUMBRAL eclipse that you would have to have trained eyes to notice at all. For most practical purposes it was invisible.

In the diagram below, only when the moon enters the “red” does the eclipse become easily visible to the unaided eye. 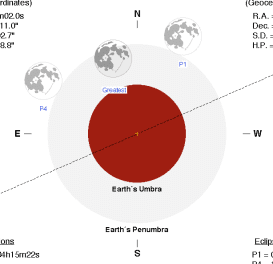 But what about the timing? Did it not happen on the feast of Purim? Does that make it special? No. I checked the last six Blood Moon tetrads in history and they all behaved exactly as this one is behaving now — a practically invisible penumbral eclipse six months after the final Blood Moon.

In a rock band analogy, if the Four Blood Moons are the Beatles playing on stage, this eclipse was like the groupie in the front row who follows them everywhere they go. You expect them to be there and even hang around after the show, but you don’t write their name on the billboard.

So feel free to celebrate the glory of God’s creation every time ANYTHING happens in the sky, even the arrival of comet LINEAR, that will be visible this week in binoculars — God created it all — but please don’t call the last eclipse a Blood Moon or a pentrad. To do so is to water down the appearance of the Blood Moons themselves.